How does one fully send the dumpster fire of a year like 2020? They team up with this year’s biggest acts for one epic New Year’s Eve livestream.

“Bud Light Seltzer Sessions Presents New Year’s Eve 2021″ kicks off right at midnight to help bring in the New Year with some of my favorite artists performing, such as Grammy-nominated artist Post Malone:

“Ready to bring in 2021 with my friends at Bud Light and kick some ass while doing it.” 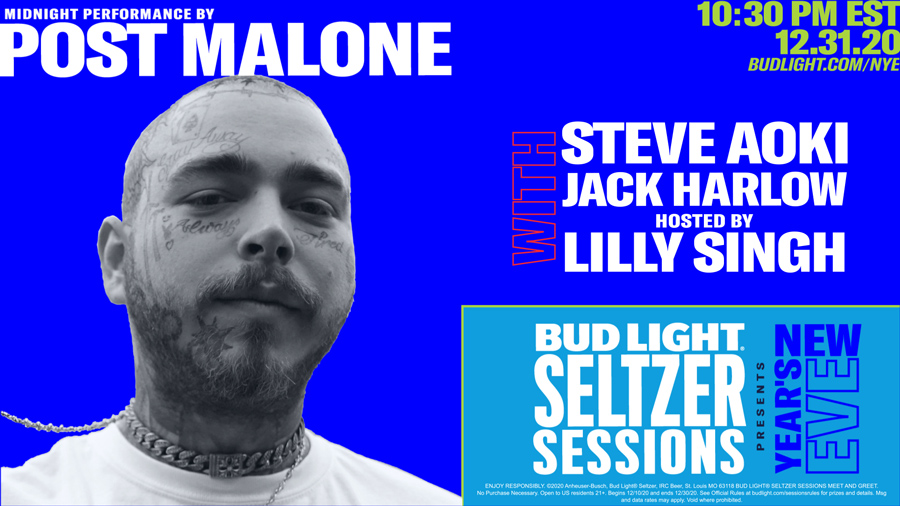 Live from Park MGM in Las Vegas, the livestream event hosted by Lilly Singh starts precisely on December 31 at 10:30 PM EST on BudLight.com/NYE and across Bud Light social channels. Taking the Bud Light Seltzer Sessions stage include Grammy-nominated, multi-platinum rapper Jack Harlow, performing his new album “Thats What They All Say” for the first time, and Grammy-nominated, superstar DJ and producer, Steve Aoki. Additional artists who are set to perform during the livestream will be unveiled over the next few weeks leading up to the show.

Here are a few quotes from the performers and livestream host:

“2020 has been a wild year and just like everyone else, I’m ready for 2021. I miss performing live and seeing my fans but until it’s safe to get back on the road, I’m looking forward to celebrating New Year’s Eve with Bud Light Seltzer Sessions and performing songs from my new album Thats What They All Say.”

“Nothing makes me more excited than performing on New Year’s Eve and I am pumped to hit the stage with Bud Light Seltzer this year. I have a special set planned to blast everyone into 2021 the proper way! Let’s Go!”

“I’m excited to host the first-ever Bud Light Seltzer Sessions New Year’s Eve show and ring in 2021 with audiences virtually. I know I’m not the only one looking forward to 2021 and this means I now have plans for New Year’s.”

Head over to BudLight.com/NYE and register for the event to know of new artists being announced and more. I’ll definitely be in attendance on the 31st, with a Bud Light Seltzer Ugly Sweater Pack in hand.