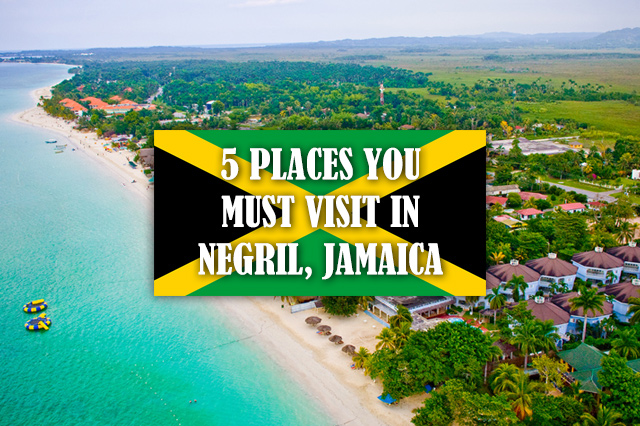 5 Places You Must Visit in Negril, Jamaica

Up until a few months ago, I never heard of Negril, Jamaica before. Matter of fact, I can’t really say I knew much about Jamaica outside of Bob Marley, Blue Mountain Coffee, and a few breathtaking photos I’ve seen from a friend’s honeymoon. Thanks to the Jamaica Tourism Board I can now officially take Jamaica off of my travel bucket list.

Below I’ve compiled five of my favorite places I visited while in Negril, everything from food to hotel to activities. Enjoy! Sitting just a few hours outside of Montego Bay is the Rockhouse Hotel. This stunning boutique hotel sits upon the breathtaking cliffs of Negril’s Cove in Jamaica, overlooking the lush waters of the Caribbean sea.

Recently, and something that doesn’t come as a surprise, the Rockhouse Hotel was the winner of the “Caribbean’s Leading Boutique Hotel” at the 2014 World Travel Awards. This was my home away from home, and it was all too perfect. Check out the quick vlog I did while staying at the Rockhouse hotel below:

It wouldn’t be a good hotel without some good places to eat, now would it? Rockhouse has three popular restaurants in Negril: Rockhouse Restaurant, Pushcart Restaurant, and Rum Bar. In addition, they also have a fresh juice bar and a great Pool Grill & Bar for those long days at the pool. All of Rockhouse restaurants and its juice bar use fresh, local, and seasonal ingredients, with produce grown in the Rockhouse Organic Garden, which I was lucky enough to tour. Last, but certainly not least, is their spa. I was fortunate enough to receive two treatments: the Aqua Detox and a 30-minute back massage. Not a bad way to start off my stay in Jamaica.

PS: This is not me in the photo below: The Rockhouse Spa Menu is quite vast and includes all-sorts of unique takes on traditional treatments. It’s the first to feature the Caribbean Essentials Spa Collection featuring all natural, Caribbean-made products. One of the Rockhouse Foundation Boys Eating Lunch

The Rockhouse Foundation is technically not in Negril, but I just couldn’t help mentioning what was one of my all-time favorite memories from Jamaica. We took a Rockhouse Hotel shuttle to West Moreland to visit the Moreland Hill Primary School, a school that in 2013 was slated to close down by Jamaica’s Ministry of Education.

Recently celebrating their 10th anniversary, and doing what they do best with the help of their generous supporters, the Foundation was able to complete a massive transformation of the Moreland Hill Primary School and stop the closure all together. In addition to the school’s much needed overhaul and funding, they added a new principal and began welcoming pre-K – 6th grade students, who had previously traveled great distances in search of a better education.

Since the Rockhouse Foundation was founded, close to $3 million has been invested in improving education for Negril’s kids. Moreland Hill is one of five schools that has been touched by the donors generosity and it was a real treat to see in person. I’m not quite sure how often Rockhouse Hotel hosts trips for their guests to see one of the Foundation’s schools, but I highly recommend you inquiring about it. If you’re interested in making a difference in these children’s lives with the gift of a good education, visit the Rockhouse Foundation donate page.

Rick’s ‘World Famous’ Cafe is a major hotspot for both visitors and locals of Negril. Known not just for their live music and beautiful views, but for something most visitors of Jamaica seek out — cliff diving. Pro Tip: If you tip them enough money they will jump from the highest point.

Ok, maybe not from this high up, but if you see the people standing below him in this photograph, that’s where you jump. If I were to estimate the height, I would say it’s around a 35-40 foot drop, but not exactly sure. You can even pay their daredevil staff to jump from their highest point holding your GoPro. I did, and the footage is nuts! What I find most appealing about Rick’s is how they charge absolutely nothing to jump from their cliff. Their staff welcomes you to the top, tells you when it’s safe to jump, and that’s it. Then you go back to the top — if you’re brave enough to do it again — and jump!

Other than the ambiance, I can’t speak too much about the food other than what I saw get served on the tables. However, it’s probably worth mentioning that Rick’s Cafe head chef, Phillip “Sheddy” Williams has been with them for over 30-years. That’s saying something.

If you’re looking for a good time and want to post up somewhere for 4+ hours, this is the place to do it. I would recommend arriving an hour-or-so before sunset so you can experience all that Rick’s Cafe has to offer. To be completely honest, I can’t really say I had a bad meal during my entire stay in Negril, or Jamaica for that matter. However, I can definitely tell you about my favorite, and it was at Murphy’s West End Restaurant. The fellow you see above in the photograph is the owner and kick-ass chef. What a guy!

Since I knew I would be having a lot of jerk chicken on this trip, I figured I would try something a little different on the menu. Still wanting chicken, I decided on Murphy’s Devil’s Chicken shown below, which was described to me as a spicier take on traditional jerk chicken. I like my spice! It was to die for! The chicken was cooked to absolute perfection. It fell right off the bone and melts in the mouth. No complaints here! If you like seafood, you’re going to love Cosmo’s Seafood Restaurant and Bar. Cosmo’s features nothing but the freshest fish possible. How fresh? The beautiful ocean you’re admiring while sitting outside their restaurant is where the lobsters are picked daily. A few of us that dined at Cosmo’s during our stay in Negril can attest to their seafoods freshness. I myself had a wonderfully seasoned lobster, while others had the catch of the day, which was a snapper. It was delicious!

I wanted to thank the Jamaica Tourism Board again for putting together such a wonderful trip. It was one I’ll never forget. I’m looking forward to my next adventure in Jamaica.

Have you been to Negril and think I left out a place to visit? Leave it in the comments below.