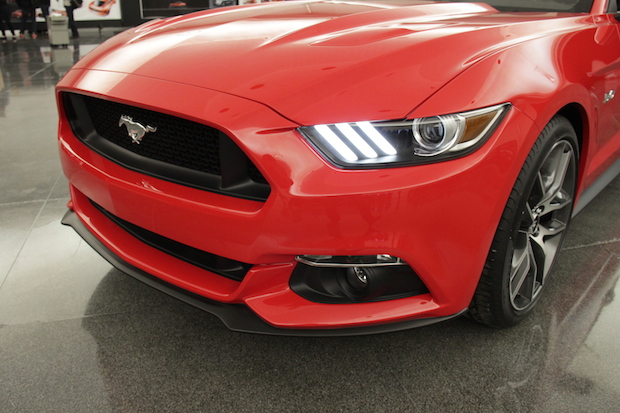 While in Detroit for the North American International Auto Show (NAIAS), Ford was kind enough to invite us into their design studio to see how the 50th Anniversary Ford Mustang was created.

The design process for the 2015 Mustang started four years ago and followed a series of design iterations between Ford’s clay sculptors, engineers, and designers. What starts out as a simple sketch, turns into high resolution renders and 3D computer models. From there, master sculptors like Larry Pelowski create life size models out of clay. Pelowski has been working with Ford for 25 years as a sculptor. Most, if not all of the employees I chatted with said they have been with the company for well over a decade. Talk about brand loyalty. Though it seems that all the hard work goes into the exterior of the 2015 Mustang, up to 90% of the user experience happens inside of the vehicle, so the interior team pays extra close attention. They focus on everything from the textures to the drivers reach and positioning. Similar to Larry shown above, Steven Bosc works at Ford as an interior clay sculptor. Here Steven is working on the Ford Mustang’s interior door: A few of the tools Ford clay sculptor’s use day in and day out. The next and almost final step in building their cars is creating a complete clay model. As you can see from the below image, the Mustang looks almost good enough to drive on the outside with sections cut away to reveal what the interior will look like: Though the car isn’t prepped for driving, the final step consists of a fiberglass model of the Mustang that is ready to be sat in, knobs pushed, and switches turned. This is the final step before we get the product we see at our local Ford dealer.

I want to personally thank Ford and the awesome team behind the new 2015 Ford Mustang for showing us the behind the scenes look. Now how do I get my hands on one?