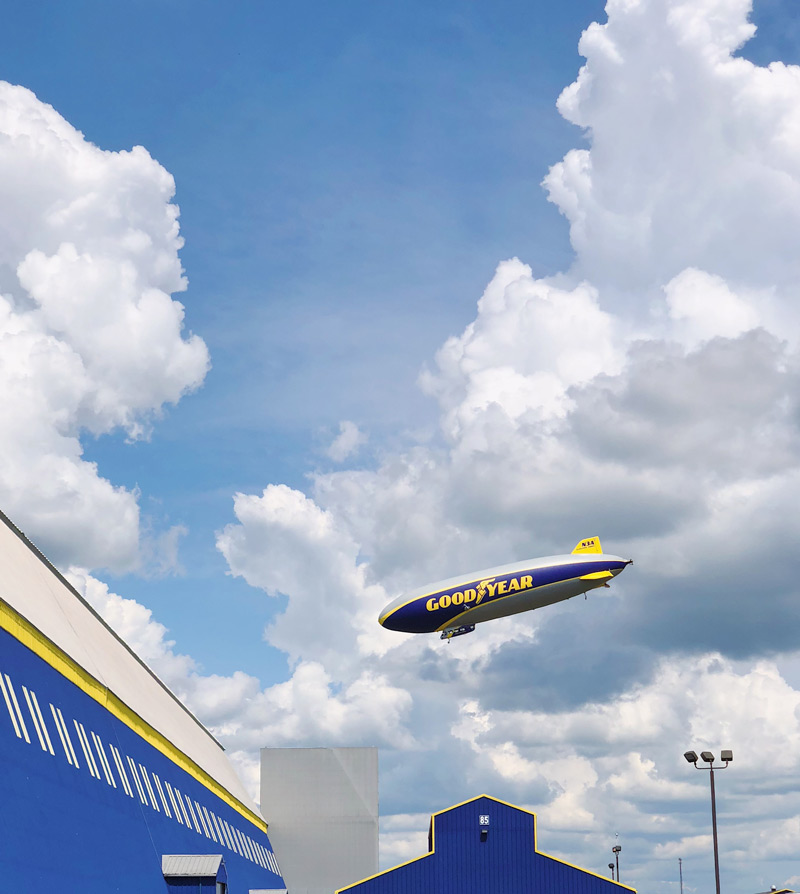 I’ve recently returned home from a trip with Goodyear that left me with more knowledge about tires than I ever thought was possible. The adventure began at the Michigan International Speedway with Goodyear Racing before heading to Ohio and getting a once-in-a-lifetime chance of riding in the legendary Goodyear Blimp. Here is what I learned during my three days with Goodyear.

For obvious reasons, a race tire compared to a standard vehicle tire has quite a few differences. Like the fact that a race tire will cost around $449 each, while a normal tire somewhere between $150-200. What really baffled me was the mileage difference. A race tire is only good for around 100 miles, while a road tire is made to last up to 50,000. Of course, the standard road tire isn’t being put to work quite like a race tire is, so naturally it would outlast it; however, 5,000 times the amount is quite remarkable. 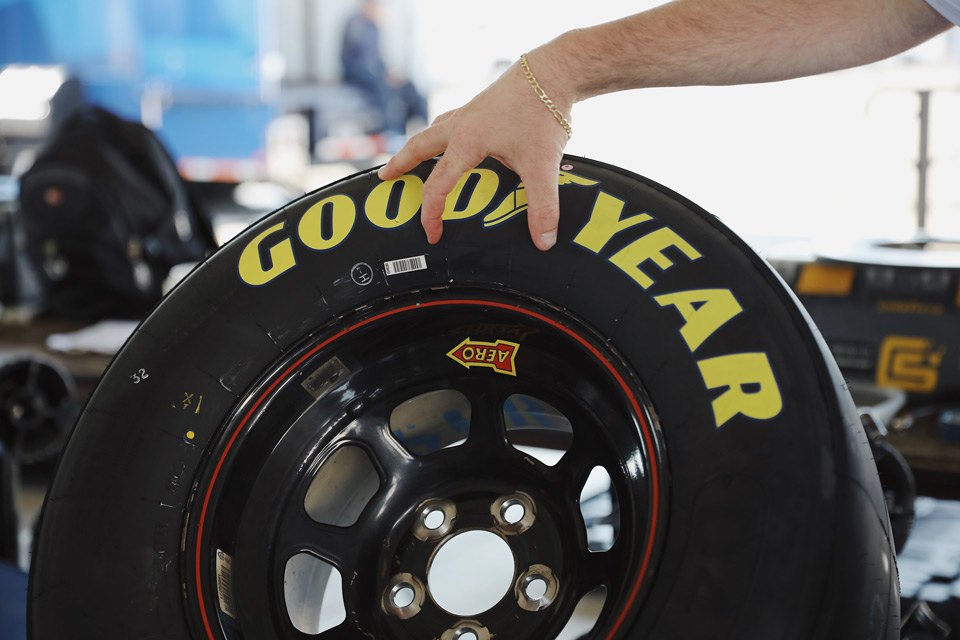 Akron, Ohio has been the home of the Goodyear headquarters since 1898, and I was lucky enough to see the entirety of it from the sky. Not from a plane or a helicopter, but from the inside of the Goodyear Blimp. It felt like a cruise ship in the sky. 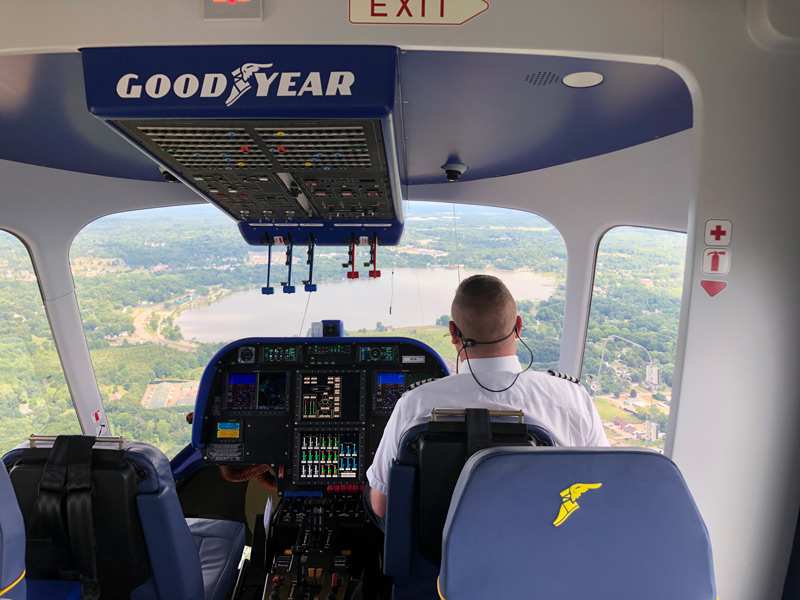 Cruising over Akron in the Goodyear Blimp

Over the 120 years Akron has been the home of the Goodyear HQ, the brand has had growth spurts resulting in them opening 48 facilities in 21 countries. As of 2018, Goodyear has 64,000 employees around the world.

As the official tire of NASCAR, Goodyear has a huge responsibility to deliver tires to the track each race weekend. 4,000 race tires to be exact; all of which are hand-crafted in the Akron facility. 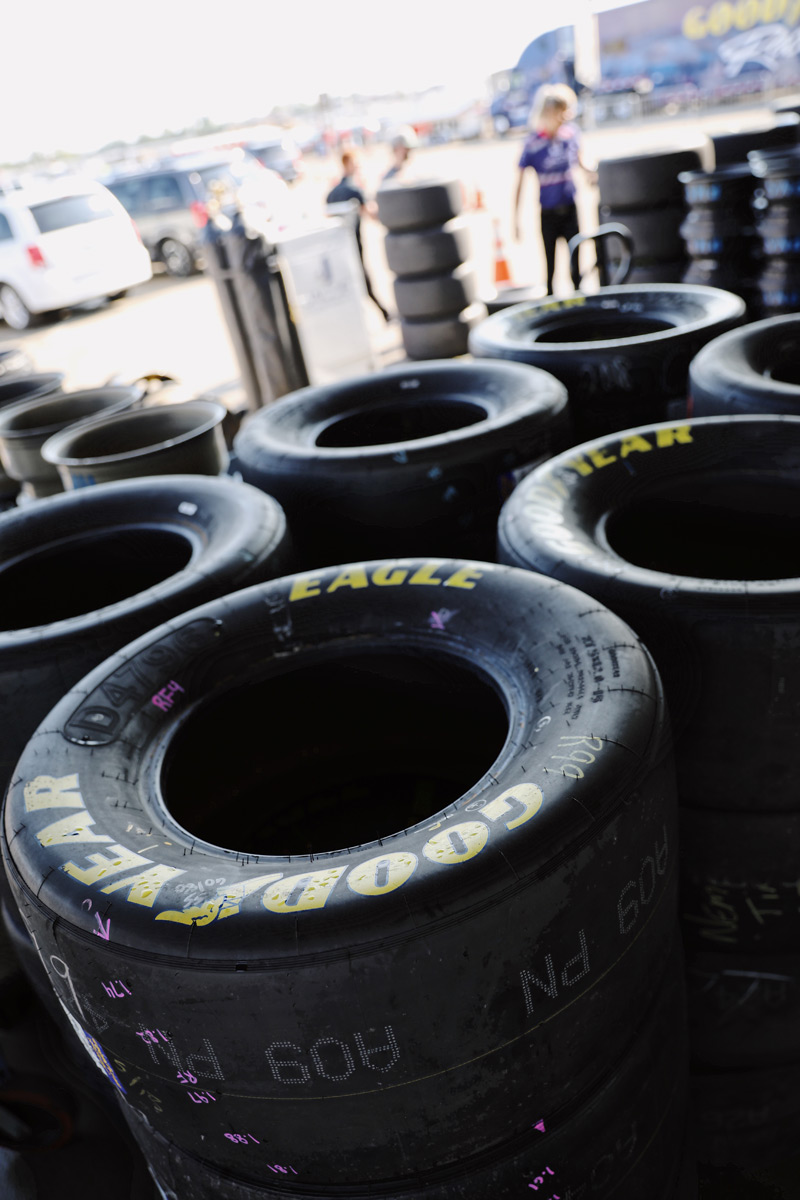 What’s even more impressive is how each Goodyear tire has to be custom designed for the needs of each race, each week. That means the team putting together the tires have to adjust the overall design so it can withstand not only the grueling conditions of 200+ mph, but the track itself.

Were you aware that the left and right-side tires differ on a race car? It makes perfect sense when you take the time to think about it, but it wasn’t something I was aware of until it was explained to me by Dale Earnhardt Jr. The newly retired legend stopped by the Goodyear suite during race day and answered a few questions me and my colleagues had. Below are what the left and right-sided tires look like on race day at oval racetracks.

Goodyear and their hardworking employees have a lot to be proud of. So much so, that if you look inside of a Goodyear Eagle tire at the track you will find the person who built it. During a tour of the Akron facility, we met a few of the workers who created the tires. One in particular, David, told us about a race his tire won. You could tell his hard work paid off and he was proud of it. 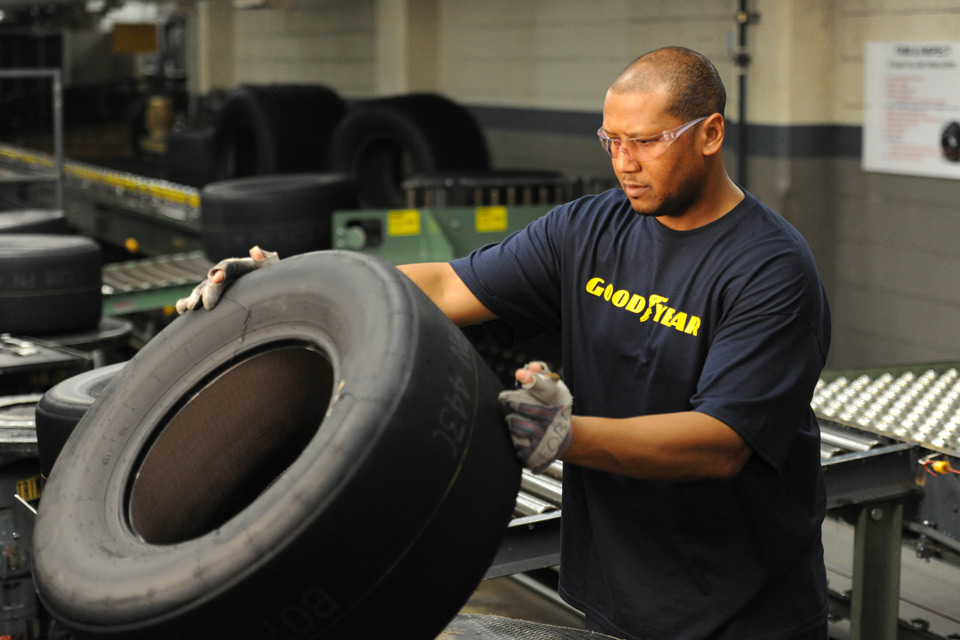 Finding the name of the tire creator inside the tire is a nice little Easter egg, but that’s not all that you will find inside a Goodyear Eagle. Every NASCAR tire built since 2006 has had an embedded RFID chip placed in its sidewall containing a unique identification number. This chip allows the Goodyear Racing team to collect data on each tire inside their mobile logistics trailer, which Goodyear sends out each NASCAR premier event. The trailer is the same design a NASCAR team has only it holds a team of Goodyear Racing techs monitoring the tires on race day.

The onboard server uses a custom software that monitors the location of each tire throughout the race for tracking and billing purposes. At the end of the race day this custom information is then uploaded to a database in Akron for archiving and data analysis.

Of course, that’s not all I learned about Goodyear. To learn more about their history, head on over the timeline they put together dating back to 1839 where the Charles Goodyear story began.