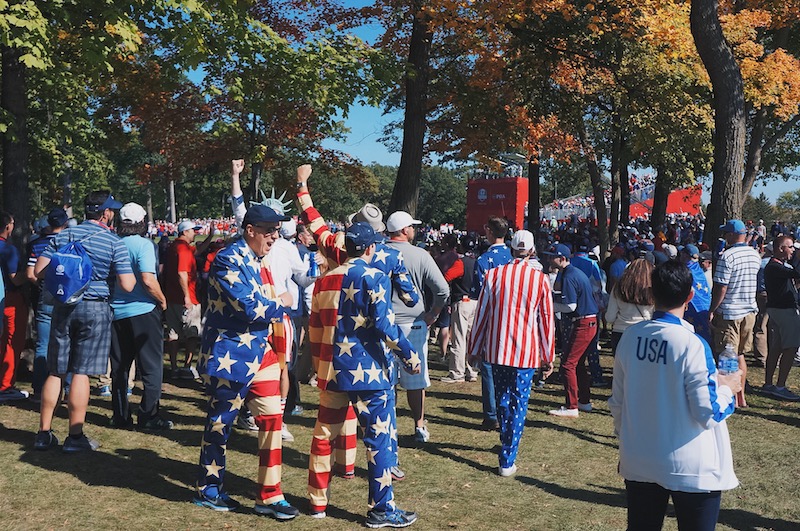 A Celebratory Weekend With Mercedes-Benz At The 2016 Ryder Cup

Spirits were high last weekend as members of the United States golf team teed off against a historically dominant group of European golfers at the Hazeltine National Golf Club in Chaska, Minnesota. The six-day tournament proved to be thrilling and unpredictable every minute of play; with Team USA shattering the European Union’s longstanding winning streak. Missed out on the excitement? Continue reading for a recap of the 2016 Ryder Cup and our time spent driving around Minnesota in the new 2017 Mercedes-Benz GLS. I started Saturday morning off with a quick rinse before trotting downstairs towards Hotel Ivy’s valet desk. From there I hopped in the seven-passenger luxury GLS and embarked on a brisk 30 minute drive to Hazeltine. Upon arriving I had full access to the Mercedes-Benz Chalet. What exactly did that entail? All you can eat food and drinks, endless shade, and even a few branded souvenirs! This being my first golf event, I quickly scarfed down a few hors d’oeuvre and a mimosa before tackling the green grass in my quest to visit every hole. And what a day it was. Emotions were high. You could taste the “across the pond” rivalry in the air. Everywhere I looked my eyes were met with Ralph Lauren shorts, Vineyard Vines caps, patriotic flags, and star-studded suits. It was truly a sight to see in all its prep glory! After a highly competitive bout, Team USA’s Phil Mickelson, Patrick Reed, and Rickie Fowler were finally able to bring the highly coveted Ryder Cup trophy home with a strong 17-11 victory against the E.U. More About The 2017 Mercedes-Benz GLS

After an exciting final day at Hazeltine, I quickly made haste to the GLS I had parked waiting for me. It was my last day in the “Land of 10,000 Lakes” and I had places to go! From the moment I grabbed the new 3-spoke multifunction steering wheel, I knew I was in for a treat. With genuine Nappa leather trimmings, a 360 degree rearview camera, and 577 horsepower AMG 5.5-liter biturbo V-8 engine – there was little doubt as to where I found myself. I truly was riding in a bonafide, S-Class amongst SUVs.