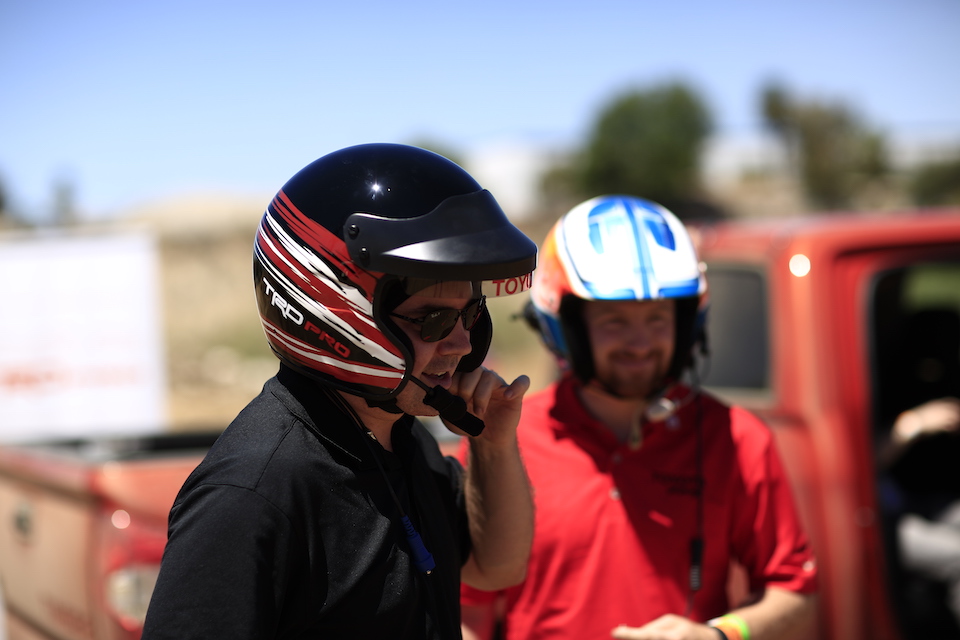 Out on the track with Toyota’s TRDPro Baja100 Team

Approximately 50 miles outside of the heart of Los Angeles the thermostat was pushing 90. There wasn’t a cloud in the sky, and you could pretty much feel the sweat being sucked off your skin by the boiling sun. But no one, myself included, didn’t feel lucky to be there.

Toyota had constructed a short off road course where we could all experience the new TRDPro family. The showman of the hour was one Andy Bell, an experienced Motocross racer and Guiness World Record holder. Not very bashful about putting the gas down and letting us hear the engine, he made the track look easy, and clocked in at roughly 32 seconds. Then, it was our turn. We had the privilege of getting inside Toyota’s Baja1000 vehicle, and seeing what we could do with it. The interior of the car made the heart stops a lot easier to take in, with full leather and wonderfully well equipped A/C. Our track tour guide and on board navigator was Ryan Millen, a veteran racer and one who has already competed in the Baja series. He may or may not have gotten a faster time than Andy while demonstrating proper technique around the track. But one thing’s for sure, I didn’t. Despite my more discretionary speed and sensitive tactics, the fish tailing in the mud and having a pro racer to guide me through it all, was basically awesome. Toyota’s TRDPro’s race for the Baja 1000 team begins on November 12 in Ensenada Mexico. My thanks to Toyota and everyone who was there, it was an unforgettable experience.