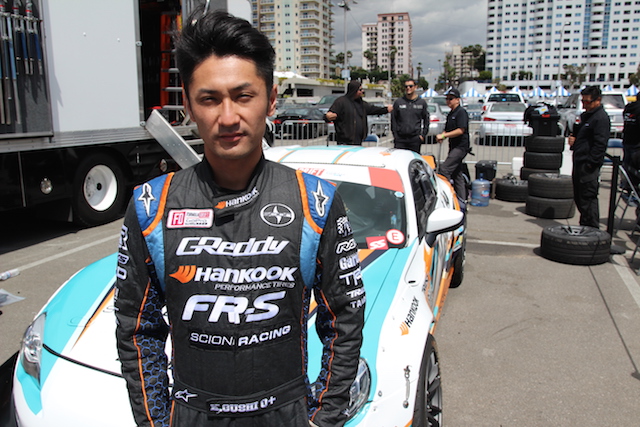 Every year there’s at least one good reason to go down to the lovely city of Long Beach. I am of course talking about the annual Toyota Grand Prix. A week long event that includes seven different races, each more spectacular than the last.

Joe’s Daily was invited by Scion Racing to participate in a ride along for the KMC Wheels Super Drift Challenge. No, unfortunately not during the race, but exciting nonetheless. Several lucky people got to sit in the passenger seat while these expert racers got to show their stuff. Namely Fredric Aasbo, and Ken Gushi.

So having seen my share of Tokyo Drift, I figured I had at least some degree of expectation when it came to this not-so-typical art of driving. That aside, nothing can really prepare you for being oriented perpendicular to an oncoming turn before you enter it. The term drift comes from drivers intentionally oversteering causing a loss of traction in the rear wheels. Basically like I said, you’re going sideways, but’s it cool, because you’re not driving.

As a passenger, the sensation is very much like surfing. There’s some force pushing you along, and you sort of just paddle with the gas and fiddle with the E-Brake. And thankfully, everything worked out great. The precision achieved by these drivers is beyond impressive. I asked, and was advised against, so I feel it prudent to share the caution that was given to me. These are incredibly fine tuned machines designed specifically for this event, so…I know it stings…don’t try this at home.

Ken Gushi has been racing since he was 13, and holds the title of the youngest driver to compete in D1 Grand Prix of Japan and the Formula Drift Championships of the U.S. when he was just 16 years of Age. In 2008, Ken helped Scion Racing debut the first ever RWD converted RS*R Scion tC, earning multiple podiums along the way.

Fredric Aasbo fell in love with cars at the early age of five. He holds more than 30 victories and multiple championships. Nicknamed “The Champkiller” and quickly becoming an icon of the David vs. Goliath drifting battles, Fredric ultimately earned the prestigious 2010 Formula Drift Rookie of the Year award.

So if you’re in the neighborhood, go root for Ken (#21) and Fredric (#151) at the Toyota Grand Prix of Long Beach, April 17th-19th. And check out the short video we created below while at the KMC Wheels Super Drift Challenge where we interviewed both drivers: