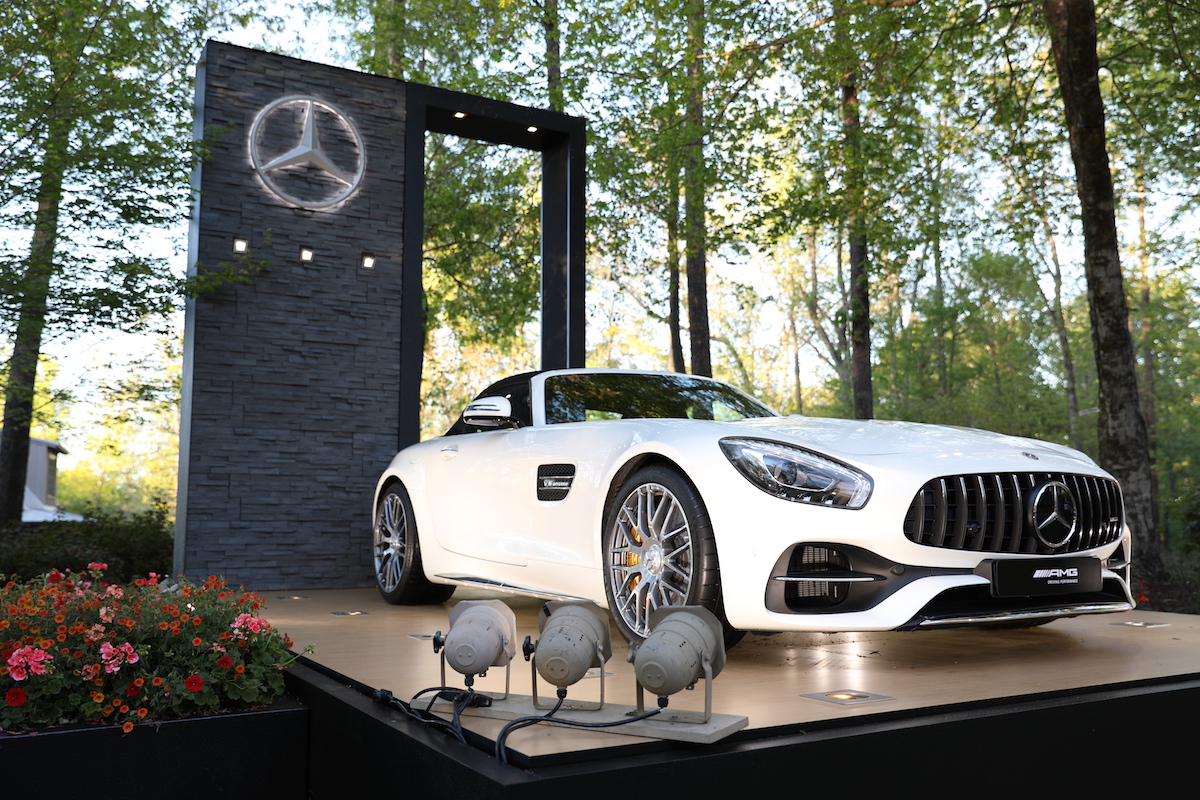 The Masters with VIP Experience From Mercedes-Benz

My journey to Augusta to witness what is arguably the world’s greatest sporting event, the Masters, began with a few hiccups. What should have been the hard part was already taken care of. In my hands were passes to the final two days of the tournament. The problem was getting there. You see, unfortunately for me and many others traveling to the Masters this year, our plans were derailed due to a major storm. Thankfully, after two cancelled flights and two extra nights trapped in New York, I was finally on my way.

In spite of all the issues I had getting to Augusta and missing one of my days at the tournament, I was still able to check off yet another thing on my bucket list. And since what surrounds the Masters is as exciting as the tournament itself, I decided to share with you all that I experienced thanks to my friends at Mercedes-Benz.

Landing in Augusta Regional Airport was bittersweet. On one hand, I was extremely excited to have finally arrived after numerous delays in New York, on the other, extremely disappointed I was missing an entire day at the course. Nevertheless, the birds were chirping, the housing was generous, and I was ready to stuff my face with all of the Pimento cheese I could find.

Mercedes put our entire group into various private homes in a neighborhood called River Island. They were absolutely gorgeous, and not too far from Augusta National Golf Club to boot! To be clear, I didn’t have this beautiful home all to myself; there were 5 other media sharing the space with me.

I’ve already mentioned how convenient it was that the River Island private homes were so close to Augusta National Golf Club, however I didn’t mention that the Clubhouse at River Island was even closer. Built by Mercedes specially for their Masters guests each year, the Clubhouse is just a stone’s throw away from most of the private homes. If you’re not as close as others, or perhaps you need to give your legs a rest from walking the course all day, Mercedes provided each house with multiple golf carts that could be driven right to the Clubhouse’s front door.

Each night began with a cocktail reception, appetizers and great conversation. Oh, and they even had a cigar booth, courtesy of Oliva Cigar. Back 9 cocktail at Mercedes reception dinner As if I would expect anything less from Mercedes, they provided some killer entertainment for our first dinner–Charles Kelley of Lady Antebellum. Give the man a bottle of bourbon and he’ll sing all night. Charles Kelley of Lady Antebellum performing for us during dinner

As someone who has their phone attached to their hip and a camera hanging around their neck at all times, you simply can’t expect me to like it when you say neither of these are allowed. Of course, if you’re the Masters, I’ll make an exception. You see, the Masters is extremely old-school, and they believe in their traditions. One of them being: no phones allowed. And when I say that, I mean it. At first I thought I would see the occasional phone sneak out of someone’s pocket to check scores, emails, etc, but I can honestly say the entire 9 hours I was at the course, not one phone was seen.

I’m sure by now it’s pretty obvious why you aren’t seeing any photos from the day. It’s because I don’t have any. Not a single one. But that’s ok, because I received the Mercedes-Benz VIP experience at the 2017 Masters, and happy to use my words to tell you about it. Mercedes provided us shuttle service to and from the course. In fact, they drove us right up to the Firethorn Cabin, located a few hundred yards away from the 11th tee. Here we were treated to a restaurant style experience throughout the day, with prepared tables, servers, a full bar and a never-ending conveyor of food. I had breakfast, lunch, snacks and dinner here whenever I needed some downtime from the course.

Best Spots at Augusta National to Watch the Masters

As a Masters virgin, I wasn’t really quite sure what I was getting into. I’ve never been to the Augusta National, so had no idea where to start. After breakfast, and right before the first tee-off, I decided to walk the front nine. Sure, that was all well and good, but I wanted to make sure I was getting the full Masters experience, because who the hell knows when I would be back? It wasn’t until later in the day during lunch back in the Firethorn Cabin, where I had a casual conversation with Atlanta Falcons President, Rich McKay (casual name drop), who shared with me the perfect holes to hang out at. This took my Masters VIP Experience to a whole new level. Here is what he recommended:

I’ve been to my fair share of sporting events, and if one thing is consistent it’s the concession prices. I can’t tell you how many times I’ve walked away from an event feeling like I was taken advantage of and left unsatisfied with my food decisions. It’s not like that at the Masters. In fact, it’s the total opposite.

What to eat and drink at the Masters:

As sad as I was to leave my first Masters, and my lovely home at River Island, I was excited to get behind the wheel of the 2018 Mercedes-AMG S65 Cabriolet. In between me and the Atlanta Airport was two and a half hours of open road, perfect for testing out the 630 horsepower S65 Cabriolet, and its roaring 6.0-liter V12 biturbo engine. It’s easy to get out of hand with a vehicle that effortlessly goes from 0 to 60 mph in 4.1 seconds. The drive felt like it flew by.

Tagging along with its AMG-performance are features you have to see to believe. A few years back when I was in New York with Mercedes-AMG for an event, I learned their “One Man, One Engine” philosophy. Something that still sticks with me this day. When you lift the hood to look at the engine you will find an engine badge with the signature of the single technician who hand-assembled it. For me, this is what makes the S65 and all AMG models so special, and it’s no wonder Mercedes owners are so dedicated to the brand.

Of course that’s not all. I highly recommend you heading on over to Mercedes-AMG.com to see a breakdown of all that the new Cabriolet has to offer.

I wanted to give a huge thanks to Mercedes-Benz for making my first trip to the Masters so special. Hopefully this won’t be my last.