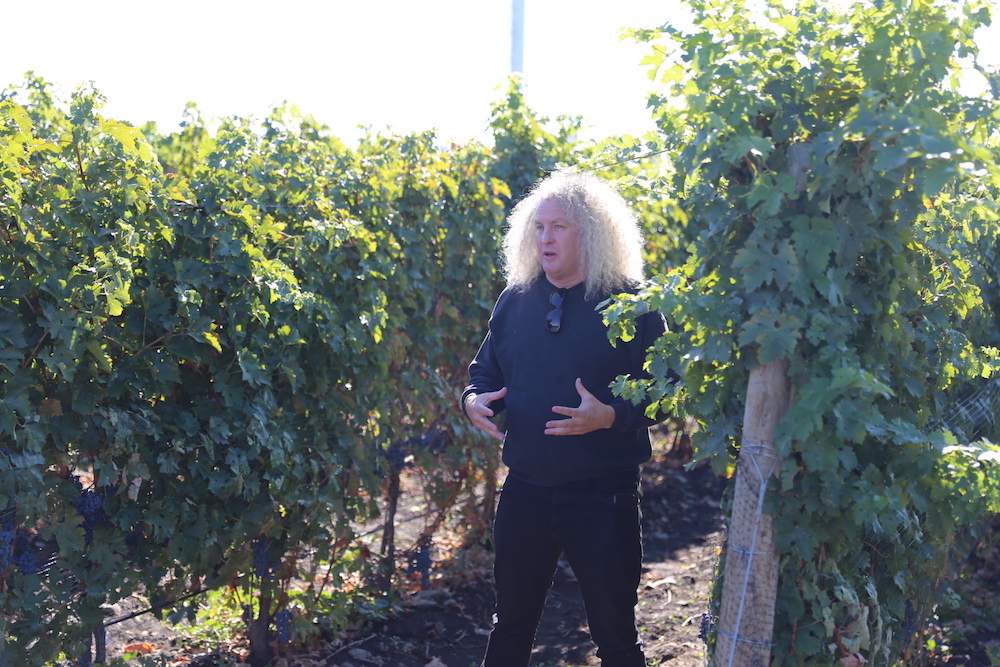 An Introduction to Charles Smith and His Wines

Who is Charles Smith, and why am I creating an introduction to his wines? A question I myself might have asked if I hadn’t just return home from a trip to Washington, where I had the pleasure of not only tasting his entire portfolio, but doing so in his presence.

Charles is unlike any winemaker I have ever met. Typically, when doing a winery tour or meeting with the winemaker, a lot of facts are discussed in between tasting their varietals, but never do you really get to know the person. This wasn’t the case with Charles. This was a day-in-the-life of Charles Smith, and it was pretty great.

I plan on writing a more detailed version of our two day experience in Walla Walla, but for now, here are the highlights – a lot of it contains drinking the good stuff.

Our morning started off at Bacon & Eggs, where we consumed tasty treats and 4+ bottles of champagne. From there we headed out to a few of Charles’ many vineyards and tasted Cabernet Sauvignon grapes right off the vine. Since it’s been, oh, and hour or so since our last sip of champagne, we stopped at a little hole-in-the-wall bar to grab a quick beer. The grand finale was eating dinner at Charles’ personal residence, the original K Vintners tasting room, where Charles cooked dinner for us and let us tour his private wine cellar. He even opened bottles of 1982 Chateau Larose-trintaudon and 1990 Chateau d’ Armailhac. You know, the good stuff. If you frequent the wine aisle like myself, chances are you have seen at least one bottle from the Charles Smith Wines portfolio. Their labels are world renowned for being bold, clean and aesthetically pleasing – all thanks to Danish-artist Rikke Korff, who is a long time friend of Charles. If you can stomach the atrocious ad-infested gallery, you can see that the 2012 K Vintners Charlotte (named after Charles’ daughter) made Forbes’ Coolest Wine Labels of Fall 2016. It’s a great wine, with a great name. While in Walla Walla, we had the pleasure of seeing the vineyard Charles planted for his daughter first-hand. What a guy!

What started in Walla Walla, Washington has expanded to Seattle, where Charles Smith Wines Jet City was opened in 2015. This second winery is currently the largest urban winery on the West Coast, located in the Georgetown neighborhood of Seattle, just 10-minutes from downtown. Stay tuned for a guide to Georgetown, courtesy of Charles Smith himself. You have to get on the Charles Smith Wines bandwagon. The man is a rockstar, and his wines are his many instruments. But don’t let me try to convince you. Charles has become one of the most award-winning winemakers in the world, receiving “Winemaker of the Year” from Wine Enthusiast, Food & Wine and Seattle Magazine. Not too shabby for a self-taught winemaker, ay?