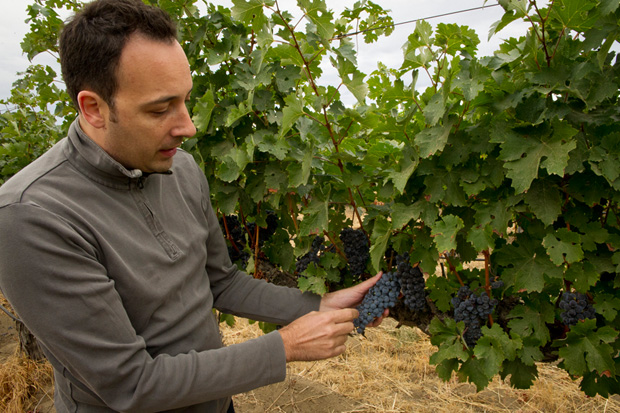 Since I began working with Columbia Crest on their Crowdsourced Cabernet campaign, I’ve had the pleasure of tasting their entire collection and gaining access to their Head Winemaker, Juan Muñoz Oca. Naturally I would have a few questions for the man in charge of the 18-month long crowdsourcing adventure. Read my Coffee Chat interview with Juan below, where we speak about winemaking and #CrowdsourcedCab:

Since picking your first grape at the ripe age of 8, and growing up with your grandfather who was a cellar master, at what point did you know you would become a winemaker?
I never thought about doing anything other than wine. It’s been like a “calling” since I was a little kid.

I’ve now tasted the entire Columbia Crest collection, while I enjoy them all, the Reserves are my favorite. Do you have a favorite out of the wines you oversee?
I enjoy working with Washington grapes a lot, many of them grow very well in the Columbia valley, I think cabernet is perhaps the one that shows that uniqueness the best.. I enjoy making cabernet especially for our H3 tier where I think it becomes one of the best values in the wine industry.

If you weren’t a winemaker with Columbia Crest, what would your career be?
I’d like to think I would be doing something really creative. I love design so perhaps an architect or a fashion designer.

What’s your favorite meal to pair with a glass of red wine?
Anything that comes off the grill… I love using fire to cook and I think the smoke/char flavors go really well with the barrel component of high end red wines.

If you could move to any city, in any country, where would it be and why?
I would be torn between Barcelona, Spain (where I have already spent some time living) and New York City. Although the cities are very different and the culture of their people is different they both have a level of energy that’s hard to match.

What’s the biggest mistake a winemaker could make?
Not spend enough time getting to know the grapes before they become wine.

Crowdsourcing a wine is so different! With Columbia Crest being the first to ever do this, have you found any challenges in making a crowdsourced wine?
I think the challenge may be to let go! We are wired to make every single one of this decisions and we take pride on how different they are from the same decisions made by others… but the opportunity to let our winemakers participate and be engaged in the process, while we educate them on the wonders of growing grapes in Washington is too good to pass. With that said, I’m actually excited to see how the crowd makes wine and can’t wait to taste the result.

Lastly, what advice do you have for the individuals helping to create the Crowdsourced Cabernet?
There are no wrong answers. As Einstein said “imagination is more important than knowledge”.

Thanks, Juan! You can follow the Crowdsourced Cabernet campaign by checking the hashtag #CrowdsourcedCab on Twitter, as well as following both Juan and Colubmia Crest’s social channels:

This post is sponsored by Columbia Crest – All opinions are mine.