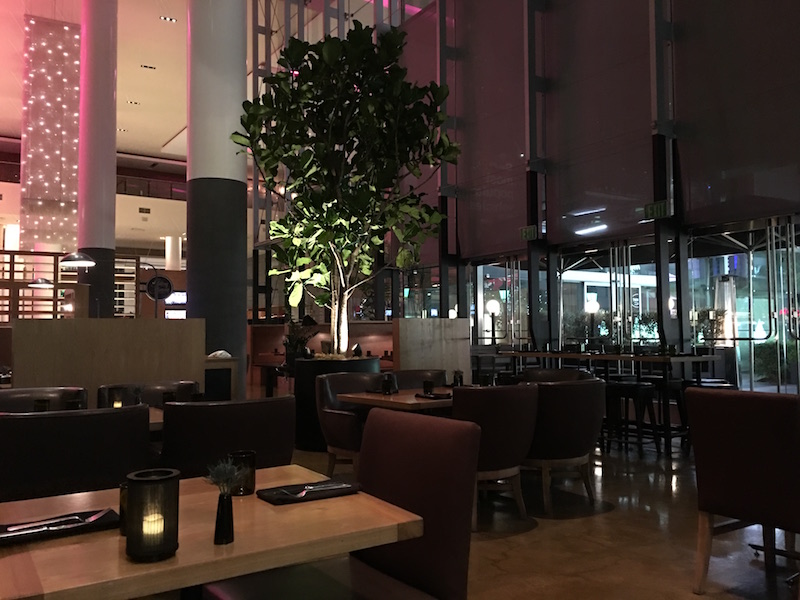 This is a sponsored post written by me on behalf of JW Marriott Los Angeles L.A. LIVE. All opinions are 100% mine.

I don’t make it to Downtown Los Angeles very often, but when I do it’s for some sort of sporting event or invitation to try a new restaurant. The latter is what brought me there this past week, and boy was I in for a treat. Ford’s Filling Station, which was once in Culver City, has now moved to Downtown Los Angeles in the LA Live area. To be more specific, it now resides in the JW Marriott hotel, arguably one of the hottest hotels in Downtown LA. I will admit that I have had their food before, but like any great restaurant they are constantly reinventing their menu seasonally, and I just had to see what they’ve created in their new location.

The Marriott was kind enough to treat both my girlfriend and I to dinner. We both started off with a few cocktails. I went with a classic Manhattan: made with Rittenhouse 100˚ Rye Whiskey, Dolin Blanco Sweet Vermouth, Grand Marnier, and Lemon; while Sarah chose a Tequila Old-Fashioned made with Tapatio Anejo, Tapatio Blanco 110, Brown Sugar, Bitters, and Orange. They both were delicious. For an appetizer we both decided to try the bacon wrapped dates. If you’re a fan of bacon, you’ll love these. Unfortunately, I forgot to take a photo of them because I was so eager to try them. Whoops! Four of them came on a plate and were perfectly stuffed with just the right amount of savory goat and mozzarella cheese. Let’s not forget about the side of white cheddar bacon biscuit for two with sea salt and maple brown butter.

To finish out the night I ordered one last drink before our dessert arrived, a Kobayashi: Monkey Shoulder Scotch, Hibiscus Cordial, Lemon, and Fever Tree Ginger Beer. If you’re a fan of moscow mules you will really like the Kobayashi. Despite being full, we just had to try some of Ford’s Filling Station’s famous butterscotch pudding. Deliciously made with mascarpone cream, pecans, candied bacon, and sea salt. We couldn’t stop eating it. Ford’s Filling Station makes for a great meeting place whether you’re celebrating a birthday or a night out in Downtown LA. Since it’s part of LA Live I recommend stopping there first to grab some food and drinks before continuing your night out. Or perhaps ending your guys night out after catching a Lakers game. Another great option, which is right next door is WP24 by Wolfgang Puck. Try both!