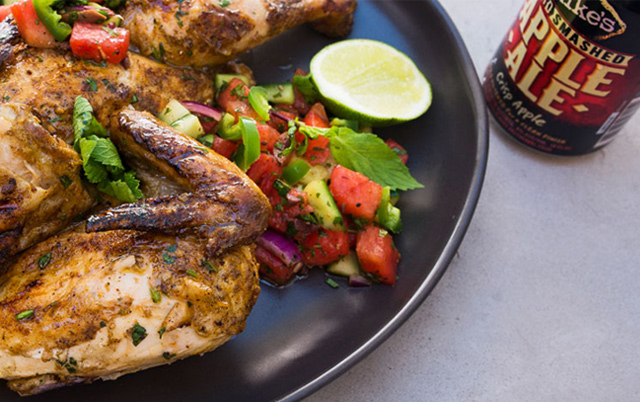 Do American classics really need to be reinvented? Probably not, but who wouldn’t want to try a new recipe from a MasterChef judge?

Graham Elliot has partnered with Mike’s Hard Lemonade to create a few new recipes that are Reinvented American Classics. Each are paired with one or more drinks from Mike’s Flavors of America summer pack. The recipe that caught my eye was Graham’s ‘Grilled Chicken with Watermelon Salsa‘, and it couldn’t have come at a better time. Chicken has always been a staple for my summer barbecues and I just so happened to be having one last week to celebrate my birthday. Many of my friends are what you might call foodies, so they can be pretty hard to impress. But since it was my birthday celebration, I figured why not try Graham’s take on the American Classic and see what friend’s thought.

Spoiler Alert: It was a major success! Everything complimented one another, especially the Mike’s Hard Apple Ale, which I made sure everyone had their very own can in front of them. “This dish is perfect to serve to company. Mike’s Hard Apple Ale brings out the smoky char of the grilled chicken and complements both the bright pop of the watermelon and saltiness of the salsa. The result? Summertime magic.” — Graham Elliot

I did have to tweak a few of the ingredients myself due to a food allergy I have. Sorry, MasterChef! Don’t worry, it was just two spices!

You can find the original recipe for Graham’s Grilled Chicken with Watermelon Salsa over on TastingTable.

For the Watermelon Salsa:

Another personal favorite recipe of mine from Graham Elliot is the GrahamBurger he made specially for his partnership with Mike’s Hard Lemonade and Mike’s Flavors of America. He throws out the American cheese and introduces some brie into the mix. “Mike’s Hard Lemonade giving that beautiful effervescence, that acidity, that cuts threw the brie, the richness of the burger,” says Elliot

This post was graciously sponsored by Mike’s Hard Lemonade. All opinions are my own.