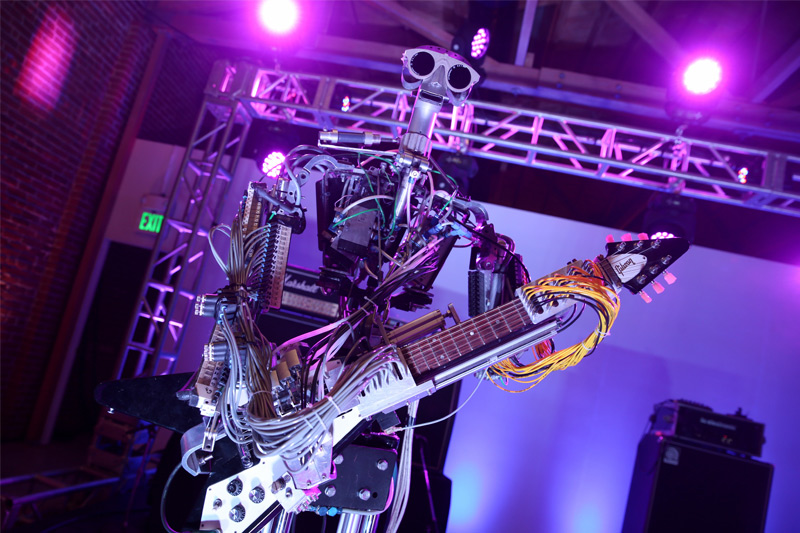 Ever been to a party so epic that you couldn’t stop talking about it for weeks afterward? The kind where, no matter how many people you told about it, you always found something different to tell them about? And the only downside about the whole shindig is that it very well may have ruined you for every other soiree you’ll go to in the future? Well that’s apparently what it’s like when you go to a party thrown by Absolut.

A couple weeks ago I had the privilege of being invited to Absolut’s Elektrik House Party, inspired by their latest limited edition bottles (available in silver and electric blue) and campaign mission to explore and push the boundaries of nightlife – whether at home or out on the town – beyond its limits. While I’m honestly not the biggest person for going out, I’d only ever heard amazing things about the bashes they host, so of course I was going to go. And believe me when I say, I was not disappointed.

From the moment I arrived, it was clear that I was going to be in for a very interesting night. Before entering I was given a StudioXO biometric bracelet that would light up with different colors, depending on my energy level. While this is pretty cool on its own, is was then explained that the energy of every individual there would be picked up by the bracelet and displayed on the wall. Even cooler: once the level of the whole party reached certain points it would unlock new rooms and features at the venue, so the people literally make the party. Intrigued? I was too. I had arrived a littler early – not typically something I do, but I have to admit I was excited – so I decided to scope the place out as I enjoyed my first drink (an amazing Blue Mule). There was so much to take in. Everywhere you looked there were incredibly designed areas made to look like different rooms in a house. My favorite definitely had to be the living room, which was equipped with a DJ booth and dance floor. It looked so good, it almost made me sad thinking about it being used. But I got over it quickly. As more people began filing in and the place began to liven up, there were even more awesome things to see. The bottle projection on the wall began to glow with the colors of how everyone in the room was feeling. One of the deer busts on the dance area walls began shooting light from its eyes as part of a laser show that was tied to the movements of the people dancing.  There was a flying drone making drinks. Yes, I said ‘a flying drone making drinks’, you read that correctly. And (to be honest, I may have just missed it at first because I was too engrossed with everything else) there was a photo booth setup with a couch that conducted static electricity, so that when you sat to take a picture your hair would stand up. By the time I finally managed to see everything, the whole place was full and the next room had been unlocked. The atmosphere in the Garage was entirely different from that of the Main House. While the design was equally amazing, instead of using the high-end pieces they had inside, here they managed to pull it off with only the things one would find in a garage. Color coordinated storage bins lined the walls, the bar was a workbench, oil drums for tables, and tool chests to house glow sticks: everything was on point! ESPECIALLY the music. I would be lying if I said that upon entering the space, trying out the new drink options wasn’t my first priority. But soon after grabbing myself a sage/pineapple cocktail, it was clear that everyone was crowding at the other end of the room. So, I ventured down to see what was up. And what did I find? A legit robot band. Of course they weren’t actually playing the music we were hearing, but the whole performance was definitely still something to be seen. So at this point, I was definitely getting a little tired. And who wouldn’t be? It was getting late, and I was a little exhausted from all the ‘oohing and aahing’ I had been doing throughout the evening. It was just as my homebody-thinking started to set in that a friend of mine happened to overhear someone say that Empire of the Sun was performing. We were certain they were just mistaken. After all, we’d already been given drone bartenders and a robot band, what more could we want? Still, there’s no way we were going to miss out, so we followed them outside. Turns out, WE were the ones who were mistaken. As soon as you stepped out back, all you could see was an enormous stage. I genuinely hope I never have to do any kind of sleuthing in my life, because this thing was seriously huge and I definitely should have noticed it earlier that night. But, not the point. Before the band began, there was a pre-show of some amazing dancers to give people time to filter in and grab some espresso cocktails. And after a perfectly short amount of waiting, the concert started. It. Was. Amazing. The lights, the costumes, the décor (I found out later that Tesla Motors was responsible for the epic electrified Absolut bottle in the background), the music, all of it.

After the performance, it was time to go home. I felt very much like a kid leaving an amusement park: exhausted from all the amazingness, but still somehow not ready to leave. This is definitely worth mentioning because, as I said before, I usually prefer to stay home. Even when I do go out it’s usually just for an hour or so before I throw in the towel. But this was so not the case this time around. Absolut absolutely (pun intended, deal with it) knows how to throw an amazing party, and if I ever get the chance to attend another of theirs again, you can bet I’ll be there.

If you’re still curious about all the craziness that happened that night, you’ll be able to catch footage from it as part of Absolut’s TV advertising launching later this year.