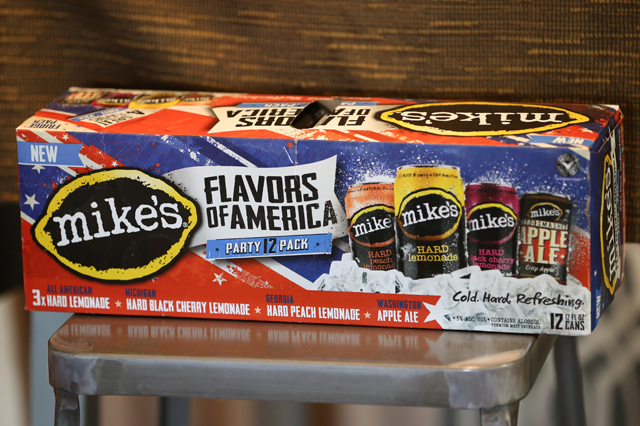 With yet another Fourth of July passing us by, you can’t help but feel patriotic and the uncontrollable urge to shake the hands of every service man and woman serving in our military. Mike’s Hard Lemonade has partnered with the Boot Campaign to help keep the patriotic message alive and in our homes.

The Boot Campaign’s mission is simple: to promote patriotism for America and our military community. They have done this successfully by raising awareness of the challenges our service members face both during and post-service, as well as providing much-needed assistance to military personnel, past and present, and their families.

Mike’s wanted to take action and create their very own patriotic salute. With that idea in mind, the Flavors of America variety pack was born, featuring four refreshing flavors: Lemonade, Peach, Black Cherry and Apple. Each flavor is iconic to the different regions of the country. For every Flavors of America pack sold, Mike’s Hard Lemonade will donate 25 cents to fund four once-in-a-lifetime experiences for veterans — up to $125,000. At the time this article was written, Mike’s gave a few deserving vets a VIP suite at a horse race, all-access experience at Nashville’s CMA Fest, backstage concerts, and hot passes at Watkin’s Glen International race track. Watch the Mike’s Boot Salute video below to see what the deserving vets were treated to:

I didn’t grow up with too many close family members in the military. Though it’s pretty rare to not have at least one person in the Armed Forces. My cousin Mark was someone I didn’t get to see very often, but knew what he was doing overseas was important not just for me, but America. And for that, I raise an ice cold Mike’s Hard Lemonade to my cousin and every man and woman who has served or is currently serving our country. I thank you.

Mike’s partnership with the Boot Campaign reminds me why it’s important to let the brave folk in our Armed Forces know that we appreciate all that they do. I for one get a kick out of surprising them and making memorable moments for them to never forget. Since I have the privilege to fly as often as I do, I’m upgraded to First Class quite often. If I see someone in uniform or wearing some sort-of military outfit — like a Veterans hat — I give them my first class seat. If they happen to politely decline, I make a point to send them a free drink or meal, on me. These little acts of kindness go a long way, and I think it’s campaigns like the Boot Campaign and brands like Mike’s Hard Lemonade that fuels them.

If you’re feeling extra patriotic and want to help out, I urge you to visit Boot Campaign today. And of course, don’t forget to look for Mike’s Flavors of America in a store near you. Visit their product locator page to see where you can pick up a pack.

This post was graciously sponsored by Mike’s Hard Lemonade. All opinions are my own.