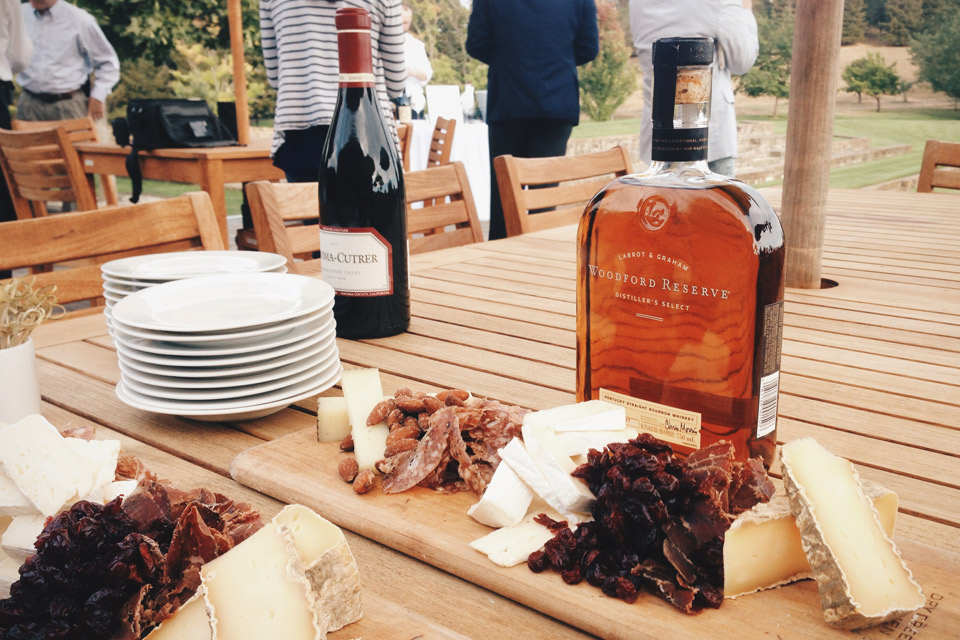 Most people don’t try to improve upon a good thing. We get complacent. We become satisfied. Some people never stop getting better. They never stop developing or strategizing or pushing boundaries. History remembers those people. Woodford Reserve has nothing left to prove. They have made their mark on the world with some of the finest Kentucky Bourbon you may ever have the good fortune to taste. They take their time. They do it right. No one person represents this better than Woodford Reserve’s Master Distiller, Chris Morris.

Chris is the kind of person that leaves an impression. When he speaks, people listen. I had the good fortune of spending a few days with him this past week on a visit to the Sonoma-Cutrer vineyard in Sonoma County, California. Most of our time was spent discussing bourbon, wine or the South, and I wouldn’t have had it any other way. The man is a wealth of knowledge. He has this unwavering sort of humble authority. He could make bourbon any number of ways for any number of companies. But he doesn’t. He makes it the way Woodford Reserve makes it, and the way his father made it before him. The best part about the way they make bourbon is that they don’t walk away satisfied. They push the industry. They become the first to try a lot of things. When you learn about the history of bourbon and why we can’t get enough of it, it makes all the sense in the world. Bourbon came to be because of a series of accidents, and while I will refrain from diving into the depths of the process of making bourbon, I will assure you that the most wonderful accidents in the world descended upon Kentucky and brought us bourbon.

Mick Schroeter, director of winemaking for Sonoma-Cutrer, giving a tour of the barrel rooms.

For the truly curious, go to Woodford County and go on a tour of the distillery. You won’t regret it. It was this same type of curiosity that took me to Sonoma County, California, where I met with one of the most perfectly southern gentlemen you could find. Woodford Reserve has partnered with Sonoma-Cutrer for this year’s incarnation of the Master’s Collection, an annual experimentation with the traditional recipe of their bourbon. In 2007, they barreled the tradition Woodford blend in a Sonoma-Cutrer Chardonnay barrel and the results were incredible. This year, Chris has returned to Sonoma County, but this time he is seeking a slightly different twist. Chris and Mick Schroeter, Sonoma-Cutrer’s Director of Winemaking, have teamed up in 2014 to bring us Woodford Reserve Master’s Collection, Sonoma-Cutrer Pinot Noir finish. It is expertly crafted and aged in a Pinot Noir barrel. It brings the intense, vibrant pinot noir flavors to the smoky, traditional bourbon. The result is a bourbon that doesn’t sacrifice on its flavor, but brings a refined taste to a great sipping bourbon that pairs well with a variety of fruits, cheeses and other treats. My visit to Sonoma started off with an incredible dinner at the Sonoma-Cutrer vineyard prepared by Chef Dustin Valette of Dry Creek Kitchen. Mick paired some incredible wines with Dustin’s courses and we got serious on the croquet court. The follow day started with a grand tour of the winery, which is preparing for harvest in the coming weeks. After the tour was more wine and lunch. And more wine. And cheese. And wine. We loaded up in one of those incredible limo-buses, none of us fit to drive, and headed south, across the Golden Gate Bridge into the heart of a bustling San Francisco summer day. An evening on the rooftop of Hotel Vitale was our destination.

Chris and Mick had prepared an incredible tasting of wine and bourbon leading up the appearance of our guest of honor, the Woodford Reserve Master’s Collection Pinot Noir Finish. You often think of bourbon as something to enjoy on the rocks in the dim corner of a bar. You don’t immediately think to pair it with cheese or fruit or chocolate. This can stand up to all of it and still give you that strong bourbon flavor you love.

After the unveiling and tasting, my new friends and I flocked to Tosca, April Bloomfield’s home in San Francisco’s North Beach. The food and drinks (all bourbon, of course) were delicious and never-ending until deep in the night (get the Bucatini. you will absolutely not regret it). The previous few days of adventure had caught up with me. I was passed out as soon as my head hit the pillow. I woke up from a deep sleep to the sun rising over the bay outside my 6th floor window. It made me think of this journey I had been on. I had flown to San Francisco to celebrate the most distinguished of Southern beverages. I met new friends from all over in the name of alcohol. And I loved it.