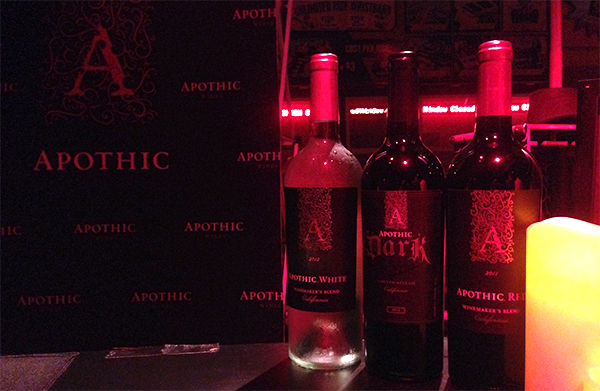 The night started off unlike most Tuesday evenings. My friend Lander and I arrived at the Wyndham hotel in Santa Monica to gear up for the evenings festivities with fellow blogger, Justin Livingston of ScoutSixteen.com – who is an awesome dude and you should totally stalk.

After settling in, our eager and thirsty group galavanted down the Santa Monica Pier to Pacific Park where it looked as though we entered the set of a horror film. The pier was unlit purposely with a few bright red lights shining down on us. It really put us in the mood I think Apothic was going for to unveil their Apothic Dark that evening. We were greeted by a few of the Apothic team members where we toasted and sipped on the new flavor.

Now if you know me well enough, you know I’m a fan of all sorts of different adult beverages. Red wine being a personal favorite, the Apothic Dark was the perfect mix between fruit flavors and dark chocolate. I couldn’t quite put all the tasting notes together until we tried their sensory experience booth. This is where they blindfolded and challenged us to see if we could guess what went into the wine. The blueberry, blackberry, and dark chocolate I could taste from the first few sips, but the last flavor that I overlooked was coffee. You would think an expert coffee drinker like myself would have spotted that immediately. Shortly after we finished at the booth, and replenished ourselves with more of the Apothic Dark and hors d’oeuvres, the event hosts made an announcement that brought out the kid in all of us. The rides were turned on and the games had begun. We’re talking roller coaster, the pirate ship, and some spiny thing that we rode one too many times.

We were all geared up with $12 vouchers to play games where I may or may not showed off my killer skills at knocking things over with balls. Think I’m bragging? Try asking the two happy ladies with giraffes that I won for them. Oh, and of course I won one for myself. The overall experience at the Apothic Dark event was definitely one to remember. From starting the evening on a dark mysterious pier to ending it with the bright city lights of Los Angeles seen from Pacific Park’s ferris wheel.

Be sure to try Apothic Wine’s limited edition #ApothicDark, and as always remember to drink responsibly.

The following post and giveaway are sponsored by Apothic Wines. Content intended for users of legal drinking age where this page is being accessed.