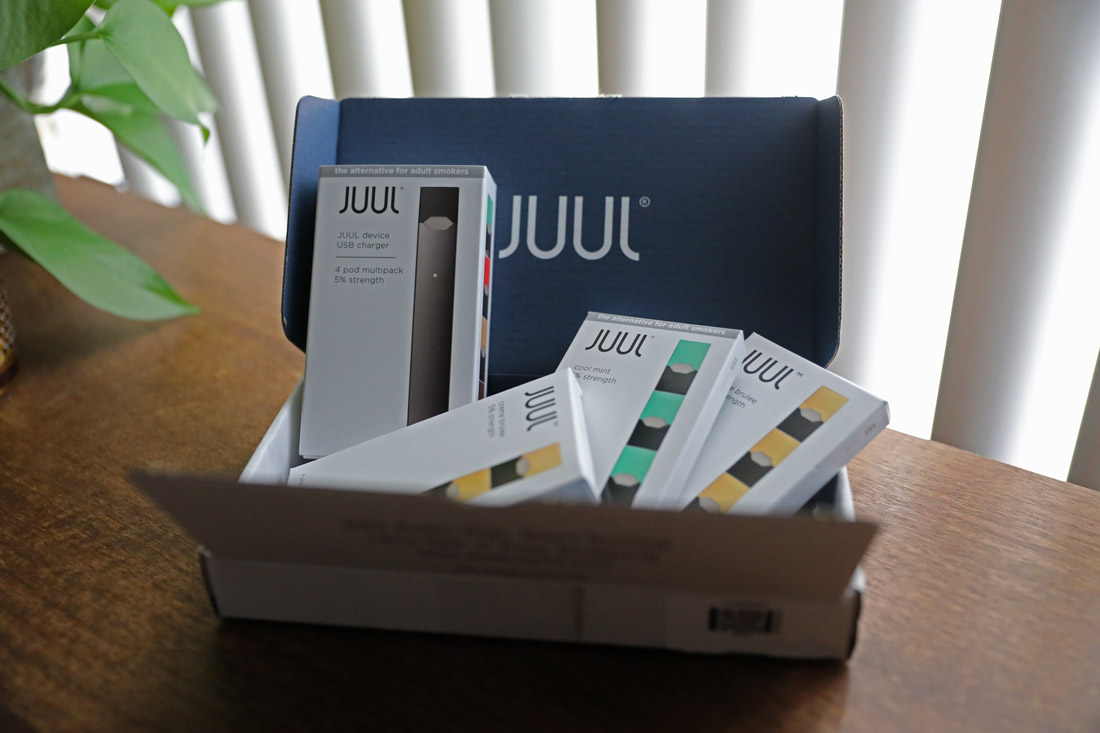 For the sake of starting with a little background, I’ve been a smoker now for almost a decade, and have been using vaporizers and e-cigarettes off and on for nearly the same amount of time. Personally, my reasons for using the latter were in an attempt to either cut down on or quit the former. However, not everyone who uses them would say the same. What I would say we have in common, and with some confidence, is that we’re looking all for an experience as close to the real thing as we can get—with the exception of things like lingering smell and stained teeth, of course. My latest experiment has been with the sleek little JUUL, and I think I may have finally found what we’ve all been looking for.

Like I said before, I’ve used quite a few of these devices over the years in an effort to replace real smoking. Whether they were self-contained and looked like a cigarette or were refill and produced similar plumes of smoke, they all had their drawbacks in one way or another. While the JUUL isn’t exactly different in this regard, the negatives of its experience have been pretty negligible. But let’s get into the specifics of why it’s my favorite.

The JUUL uses JUULpods, which house both the atomizer and JUULsalts™. It takes all of about a second to snap them in and out, which is helpful because I tend to be in the mood for a different flavor all the time. Also, if I’m being honest, I was never a good sport about having to mess with switching out heating coils and adding liquid when I got a craving. That said, you can imagine how impatient I was with charging too. With the others, I’d never know the battery status until it was basically too late. Not to mention that charging was a pain that meant deconstructing the gadget and waiting forever for full power. The JUUL has a charge port at the bottom that magnetically sits in a USB cradle, has colored indicator lights so you always know how much battery you have left, and only takes around an hour to completely charge. And, to round out the topic of ease, they offer monthly auto-shipping so you never have to worry about running out. It’s the most authentic

Admittedly, there are others out there that look more realistic, but all things considered, it’s definitely the closest in experience. It might sound weird if you’re not a smoker, but one thing other smoking alternatives were always missing for me was the “burn” that came with the inhale. Of course, you don’t want a harsh draw, but I could never quite tell exactly how much I was taking in. The JUUL seems to finally have figured it out. When you use the device, you still feel the sensation you get when smoking a cigarette, but instead of smoke you get vapor. So no more guesswork and potentially overdoing it, and one less thing to remind me that I’m quitting. With the exception of actually lighting it, usage is pretty close too. There are no buttons to press, you just draw in like you would with a cigarette. And, though you wouldn’t really hold it the same way, the size and weight in your hand are only slightly off.

The JUULpods come in mango, mint, virginia tobacco, fruit medley, and creme brulee. I have to say I like all of them, but I was a menthol smoker and I have a sweet tooth, so you can guess which two are my favorites. Despite their great taste, though, the amount of money I’m saving is probably the biggest factor in why I love them so much. Each pod lasts for about 200 puffs (approximately as much as a pack of cigarettes), and only cost pre-tax $4 each or less from juulvapor.com*. Since I use to go through a JUULpod in the same amount of time as it would take to go through a pack of cigarettes, I can make the price to price comparison. Other things to note

As vaporizers and e-cigarettes are relatively new to the nicotine world, their effect on health is still being sorted out. With that in mind, JUUL seems to be about as responsible as they come. They implement several consumer protections into their product, work to ensure all components are compliant with both international and US safety and quality standards, track FDA regulations closely, and rigorously test at both their own labs and independent ones. And, as of August 23rd of this year, they joined 270+ states, cities, and counties in raising their minimum age required for purchase (from their site) from 18 to 21.

So, if you happen to be an adult that smokes, and are looking for a good alternative, I would take a look at the JUUL. It’s sleek, incredibly easy to use, great for your wallet, and gives the closest simulation to a real cigarette I’ve ever had.

This review was sponsored by JULL Labs, Inc. All opinions are 100% my own.