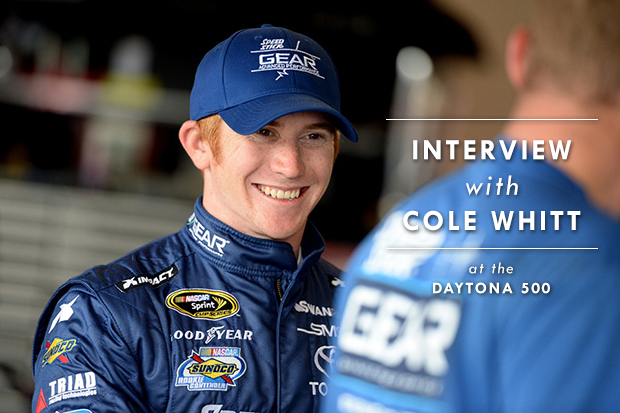 While at the Daytona 500 this past weekend, I had the chance to interview NASCAR rookie Cole Whitt. He talks about preparation for this season, what’s on his mind before a race, and what’s it like being one of the rookies.

Joe’s Daily: Can you tell me what you’re doing down here this week in Daytona?
Cole Whitt: I’m down here trying to qualify for our first Daytona 500 race. Our team actually doesn’t have points from last year so being a rookie team and driver everything’s new to us but we have to race our way into the race. So, coming up in the Duel we need to run top 15 and once we do that we can run the Daytona 500 and we’re going for the best finish we can. JD: How are you preparing for this race and the full season?
CW: Preparing for this race has just been trying to get our Speedway stuff as best as possible. We actually came down here and tested in the off-season but that’s just from the team side of it. From my side of it, preparing for not only this race but the whole season has been putting myself through hard workouts and being as prepared as possible in the mental aspects, putting myself in that extreme state, which is the same thing we deal with in race cars as far as being really intense racing and knowing how to handle yourself when you’re in a really miserable state. JD: As a rookie, what does this race mean to you?
CW: This race means a lot. I wouldn’t say our whole season depends on it just because of all the races coming up and being a plate race, almost anything can happen here. We saw it yesterday in practice: we cut a tire down and got in the wall ourselves. Then there was another big wreck with our teammate and some other guys and that’s just part of plate racing. It’s really tight; the craziest racing we do and it’s chaos at high speeds. It seems that here, if we have a good finish, it will definitely give our team momentum rolling into the season but at the same time I would say that if things don’t work out here, we’re still going to Phoenix and will dig hard to progress the whole season and have a good year. But coming out here means a lot, we want to make the 500 and we want to run good down here.

JD: What’s racing through your mind before a race?
CW: I’m hoping that everything goes right and the whole world disappears to me. I feel like I just go out there and do everything I can and try to do right and try to be smart. Having a clear head going into it makes the biggest thing. If you’re distracted and thinking about other things it could make your reaction times off. Just being clear minded and focused on just trying to be smart and aggressive during the race. JD: Is there any competition that you have your eye on?
CW: I think the biggest thing we have going is our rookie class. This year’s class is huge and we have so many different drivers. I think this is the biggest rookie class the Cup Series has ever seen and there’s so much talent with a lot of young guys coming up. To be part of that is pretty cool but at the same time we’re going to have some good competition and those are the guys I’ll be racing against. You know, Austin Dillion, Kyle Larson and obviously our teammate Parker Klingerman – those are the guys that I’ll probably be battling with throughout the year.

JD: I know you have a crew following you all week shooting video. Where can we see that footage?
CW: Go check out the Men’s Speed Stick GEAR YouTube channel and we should have some good footage coming up in March with all the stuff that’s going on down here in Daytona.