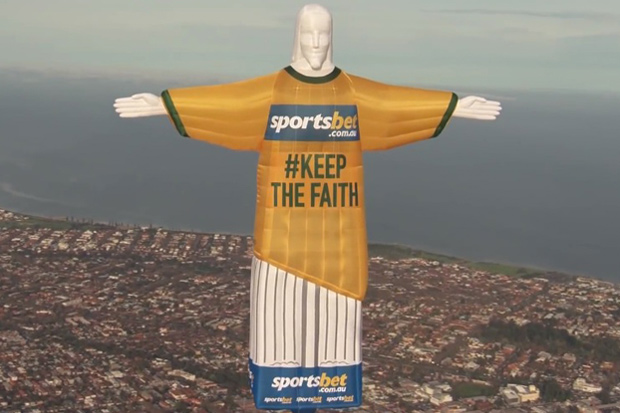 Gambling company Sportsbet are causing a stir among Christian groups in Australia due to their latest World Cup marketing campaign. A 150-foot tall hot air balloon in the shape of Brazil’s famous Christ the Redeemer landmark was seen floating over Melbourne, wearing a football jersey.

“There seems to be no corporate or civic responsibility to say, ‘Hang on, is nothing sacred?’”, said Rev. Tim Costello, chair of the Australian Churches Gambling Taskforce. “Is betting absolutely dominate not just in casino and gamble areas and TV rooms, but now literally the sky?

“This is extraordinary. If they knew anything about Jesus they’d know he’d be overturning tables in the gaming halls, because they’re highly addictive and destroy lives.”

Although there is no clear anti-gambling message in the bible, Christians in the country are concerned over the use of Christ to promote it. Australia ranked as number one for the most money gambling per capita last year and problem gambling is a real issue. While some feel that a properly regulated and legalised market could be the answer, with Casino Reef estimating it would generate an extra $201 million for the government per year, others feel that it should be prohibited completely.

Rev. Costello has called on the Football Federation Australia, the sport’s governing body in the country, to speak out against Sportbet’s campaign. He continued:

“One of the great statues in Rio is Jesus, and Brazil is a Catholic nation that takes its faith seriously and its football fanatically. You don’t exploit those things that are sacred to people simply for your own advertising reach, and I think that soccer as a world game should be sensitive to that and certainly express their disdain for these types of advertisements.”

Matthew Campbell, a Sportsbet spokesman stated that, while some may be offended by the campaign, the use of Jesus’ image was never intended to be controversial. “We realise that some people are entitled to their opinions, but from our point of view with over half a million followers on social media, we think we’re talking to the right people and those people might have a different opinion.”

He added that the campaign was not used to promote gambling but rather to encourage support for the nation’s World Cup team. “It’s not actually about having a bet,” said Campbell. “It’s about rallying the troops behind the Socceroos, who are massive underdogs.

“It’s a balloon replica of a famous statue that is used extensively to promote the World Cup. You can’t turn on the TV promotion without them showing the Christ the Redeemer all the time. All we’ve done is bring it to Australia and give it a Socceroos flavour.”