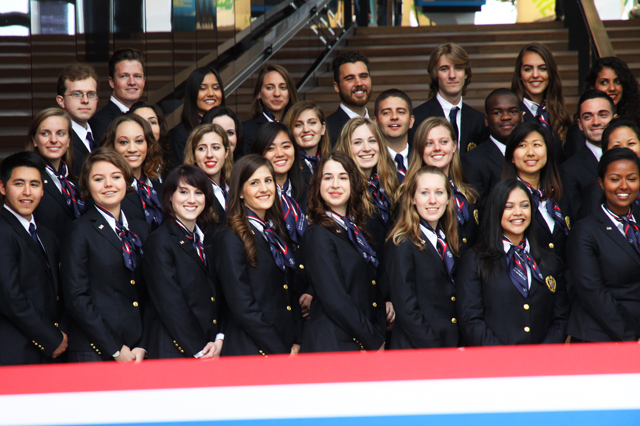 Brooks Brothers has been announced as the official apparel sponsor for the USA Pavilion at this year’s world’s fair, Expo Milano 2015. Touted as America’s oldest apparel brand established in 1818, Brooks Brothers created custom uniforms for the 120 Student Ambassadors representing the some of the most intelligent students from colleges and universities from across the United States.

Each student will wear a Brooks Brothers button-down shirt and blue blazer. To finish off each outfit, men will wear a special edition tie and women a custom silk scarf; both featuring the USA Pavilion’s flag design. The USA Pavilion theme for this year is “American Food 2.0: United to Feed the Planet“, encouraging conversation towards topics like, food security, sustainability and mobility.

You can also see more of Brooks Brothers custom uniforms on the staff of the James Beard American Restaurant at Seven Stars, located at the Galleria Vittorio Emanuele II and for the USA Pavilion’s “Food Truck Nation” located on the USAP grounds. The staff will be see in red & white gingham shirts, a navy tie and an apron crafted in denim.

Jerry Giaquinta, Chief Communication Officer of the USA Pavilion at Expo Milano 2015 recognized the partnership by saying, “We are honored to have Brooks Brothers as a partner, as they are exemplary of American creativity and business innovation. We are grateful for the tremendous effort they have put into designing great outfits that blend Italian and American styles. Student Ambassadors were thrilled when they first tried them on”.

Brooks Brothers saved a few exclusive items for fans that aren’t part of the USA Pavilion by way of ties, hats and a denim apron, all made in the USA. These collectible items will be sold exclusively at Brooks Brothers flagship store on Pietro all’Orto in Milan, Italy, as well as at the USAP.