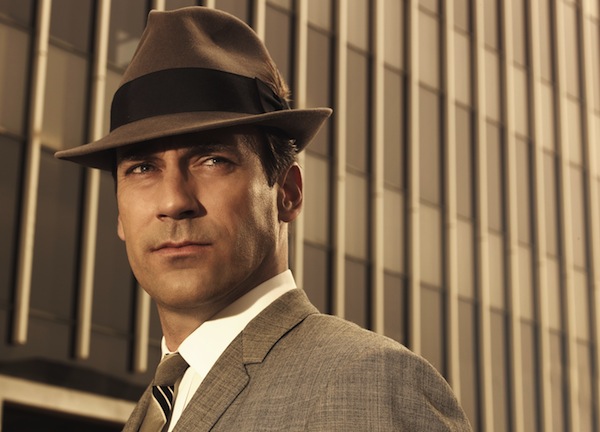 So what is it about the brooding ad man known as Don Draper that makes women want him and men want to be him? Undoubtedly, his dashing sense of style has a lot to do with it, as does his financial success in life; to both those ends, Don is represented as something of a connoisseur of luxury watches, having a new one in each season of the show. By taking cues from the following horological masterpieces featured in Mad Men, you too could proceed through life with a refined sense of gentlemanly finesse: Most sources do confirm that Don Draper’s Season 1 watch is a Memovax, while other sources say that it’s still up for debate, claiming that it might be either a Seamaster, a Suveran Omega, a Universal GenËve Polerouter, a Rolex Cellini, or even an Elgin. Season 1 of Mad Men has more inaccuracies than any other season of the show, which probably explains some of the confusion on this topic among watch collectors. Thankfully, the show’s historical accuracy has been nearly impeccable from season 2 through the current season 5 episodes. Regardless, Don’s season 1 watch has a round steel case with a silver or white dial and a black outer ring.

The Memovax is a 1960s horological icon and considered to be one of the most classic vintage men’s watches. Originally the watch was marketed at bon vivants and early international businessmen. It is known for being the first automatic wristwatch to include a mechanical alarm function. Produced throughout the 1960s but discontinued shortly thereafter, the style was not produced again until 2012 when Jaeger-LeCoultre released a re-edition. It has been confirmed that Don Draper’s Season 2 watch is a Jaeger-LeCoultre Reverso Classique. This watch features a yellow gold case and a brown leather strap that is most likely made from crocodile or alligator. This watch was an appropriate choice for the Season 2 Mad Men storyline, as Don gets a big raise at this time when he makes partner at Sterling Cooper. This watch is also a good choice for the storyline, as this is the season where Don’s wife Betty has his initials engraved on the watch’s caseback. The yellow gold case is able to swivel around, which allows this type of engraving or personalization to be revealed.

The only debate about this watch choice was whether or not one could purchase a Reverso model in the US during the early 1960s. The watch was first introduced to the public in 1931. However, the exact date that Jaeger-LeCoultre watches were first distributed in the US is not known, leading some watch collectors to question whether the Drapers could have bought one there during season 2’s early-60s timeframe.

There have been a number of Reverso Classique models throughout the years. Some models have an additional dial on the back or have a transparent back that allows one to see the watch mechanism. Reverso models are still available today, and remain a popular timepiece of choice for many businessmen and businesswomen. Don Draper kept the Reverso Classique through Season 3 and didn’t upgrade again until Season 4. There are a handful of prominent shots throughout Season 4 of his new Rolex Explorer. The dial’s 3, 6, and 9 Arabic markers confirm to all collectors that it is indeed an Explorer model. Season 4 takes place in the year 1965, so the only debate about this model is that the watch Don wears seems to have a synthetic sapphire crystal, which would not have been possible in 1965. Otherwise, the model appears to be historically accurate.

The Explorer, or The Explorer I as it’s sometimes known, is considered to be Rolex’s most classic sports watch model. One of the most famous examples of it is James Bond’s Explorer watch, which Ian Flemming featured throughout his original Bond novels. Although the model has been updated throughout time to meet modern standards, the early 1953 models are almost identical to the current models. Throughout the years, the model has kept the same diameter size of 36 mm. With the start of 1966 for Season 5, it was time for Don to get a new watch, as he would only be caught wearing the latest model; apparently, the Explorer just didn’t cut it anymore. The writers allegedly had a debate about which model Don would wear, and they ended up choosing an Omega, more specifically the Seamaster Deville, because it was known as in iconic watch in the 1960s.

Even though the 1950s Seamaster models had water-resistant cases, they were known for their elegance and were considered close to par with the Constellation collection. In the 1960s, Omega marketed the Seamaster as a diver’s watch, which is what it’s still known for today. Alternatively, they marketed the Deville as a dressier watch.

The Seamaster Deville that Don wears is refined and elegant. It has a date indicator and a black dial. The watch is 34mm and most likely has a 562 or 563 automatic caliber, making it one of the nicer Omega automatic caliber watches that was produced during this time period. Don’s watch was manufactured sometime in the early to mid 1960s, making it historically plausible for him to be seen wearing it in 1966. A few years later, Omego released DeVille watches as one of that brand’s separate collections.