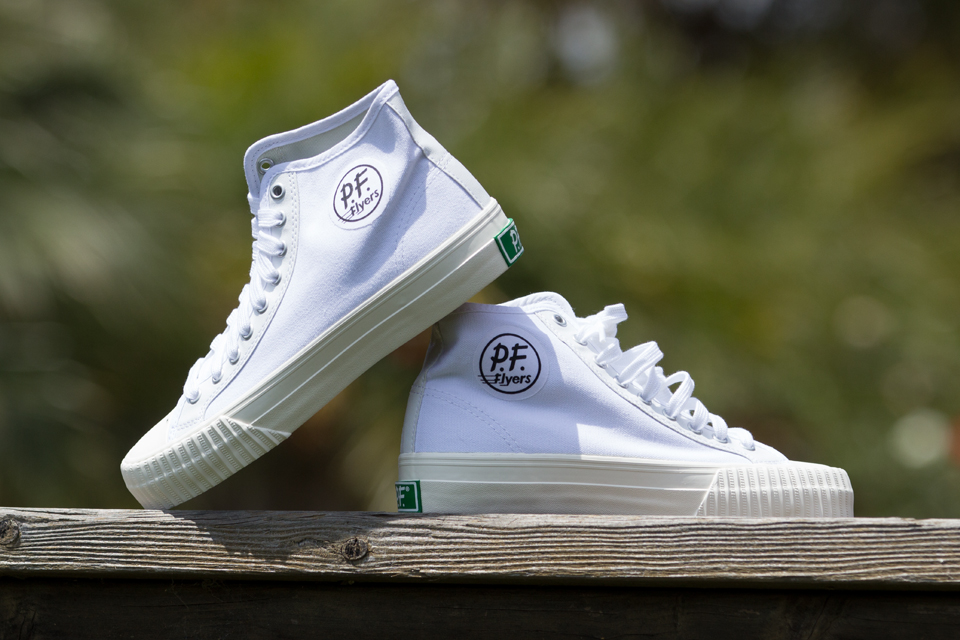 This is a sponsored post written by me on behalf of PF Flyers for IZEA. All opinions are 100% mine.

Ever since I watched The Sandlot and saw Benjamin Franklin Rodriguez put on his fresh pair of PF Flyers, I knew I had to have some. You see, my brother and I were hugely into baseball at the time the film came out, so the characters and what they wore had a major influence on us. You just weren’t cool unless you were rounding second-base in a pair of PF Flyers on your feet. Every kid that liked baseball wanted to be like Benny. His iconic shoes was just a stepping stone.

To help re-live the nostalgia I get from watching The Sandlot I decided I would pickup a new pair of PF Flyers — an all-white pair to be exact. I decided on white since I’m no longer playing baseball and the worry of getting them dirty is nonexistent. When I was younger I owned the all-black pair like Benny did in the movie.

PF Flyers of any color go really great with shorts, pants, or jeans. My personal favorite pairing is my all-white Flyers with my black jogger sweat pants. This is my typical outfit in the mornings when I venture outside to grab a cup of coffee. I can’t begin to tell you how many people compliment me on my shoes. What’s not to like in a classic?

I have a different theory why I receive the compliments I do with my Flyers. Since the beginning, PF have proudly welcomed their Uncommon American Style which I love. Instead of following the masses and wearing what everyone else is wearing, they promote you Unfollowing the Crowd. While at a family BBQ this past weekend I snapped a few photos of my new kicks at my brother Dave’s house. Let’s just say he was a bit jealous. As I mentioned before we both loved baseball and had the black pair Benny had in The Sandlot. The photo featured at the top of this post, as well as the one you see below, were shot out back at my brother’s place. Just try to imagine for a second a grown man drooling over a pair shoes he wish he had. Don’t worry, I showed him where he could buy his own pair.

I almost forgot how comfortable and durable PF Flyers were since I haven’t owned a pair in many years. The vulcanized rubber fronts protecting the toe area is tough and adds a certain flare to them. My particular pair has a bold green rubber PF on the back heel that makes them pop nicely. And let’s not forget the classic “PF Flyers” round logo found on the outside of both shoes.

A Little History About PF Flyers

PF Flyers were created by BF Goodrich after the tire manufacture discovered new uses for their vulcanized rubber and canvas. Through the ’50s and ’60s, the PF brand grew to be one of the most popular brands in America for both work and play. That title should come at no surprise with the backing of sports and military. I recently learned PF was considered the standard issue in the US Army.

If this post struck a cord and brought back all-sorts of nostalgia like it did for me then you’re probably wanting a pair for yourself. Head on over to PF Flyers website to shop now. There you will find countless colors and styles to choose from.

Check out PF Flyers on Tumblr to see fan taken photos and updates on new styles of PF.