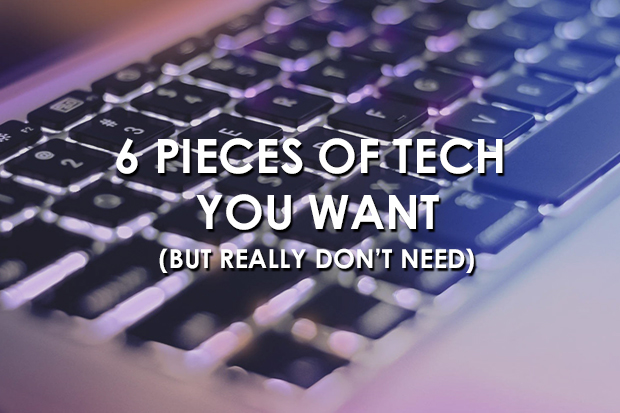 6 Pieces Of Tech You Want (But Really Don’t Need)

Which, if you’re anything like me, leaves you with a room in your house filled with gadgets that all have the same feature – dust collecting. Just like that oh so essential iPad Keyboard that was going to save you hours on emails. And you wouldn’t have it any other way. But sometimes you need to think rationally about it. Which is where this article comes in.

Here’s six pieces of the hottest tech that you really want. And the real reason why you probably don’t need it… You already know what this is, don’t you?

It’s the perfect way to immerse yourself in any game you’re playing. No more sitting on the sofa staring at the screen, hoping the HD and Bose Speakers do it justice.

Instead you can actually be there in the midst of your favourite game. This is Gaming hyperrealism at it’s finest. And if you want entertainment on a whole new level.

Why you want it: You’re in the game, what’s not to love?

Why you don’t need it: Because, let’s be honest, that 4K OLED TV you’re about to buy is probably enough realism for your Monday night session of Call of Duty. Have you seen the film ‘Her’ with Scarlett Johansson? This is the real life version of that. But without all the weird bits.

And it looks amazing.

This promo video shows a ton of benefits: it plans your day, answers your calls, can be used anywhere, laughs at your terrible jokes (and turns them into tweets).

It’s everything you could possibly hope for, and once it’s out of production, you’re going to be crying out for one.

Why you want it: Easy life. You’re forgetful. You’re a busy man.

Why you don’t need it: It’s not Scarlett Johansson. You can tweet your own terrible jokes. It’s scarily close to robots taking over the world. GoPro Camera’s are the perfect blend of Geek meets Adventurer.

Whether you’re travelling the world, doing extreme sports or changing your cars oil, it makes it look epic. Easy to use, versatile and now with 4k video. You can create beautiful videos for just about anything.

It’s almost the perfect camera for anyone, and you definitely want one, right?

Why you want it: Creating video’s like this would be amazing. And you would always feel like Indiana Jones.

Why you don’t need it: Because life just isn’t that interesting. You don’t do anything that needs a $400 camera sticking to your forehead, do you? FLIR stands for: Forward Looking Infrared. Originally used in the back of Military Aircraft, it’s now available for phones.

Simply clip on the case and it’s transformed into a Weapons Grade piece of equipment.

Essentially, this is Night Vision Goggles for your phone. Which is probably the easiest benefit to sell in the history of Tech.

Why you want it: Ever since you first watched Step Brothers, you’ve secretly wanted night vision goggles.

Why you don’t need it: There are only so many times you can point out to your friend Jimmy that his nose is the hottest part of his face. This is the pure art of Photography, with a technological feel. If you’ve ever been interested in a DSLR Camera, you’re going to want one of these as your next model.

The three different models have their own specs – different exposures, ISO’s and resolutions. For anyone into Photography Tech this will have you salivating in no time.

Why you want it: You want a camera that, no matter what, takes the best photo you’re able to take. The BeamBox is a beautifully crafted speaker made from pure Americana. Each speaker is a beam that supported a house for at least a century.

The sound it creates it beautiful: fully optimized for Bluetooth and it has a wireless range of up to 100’ depending on your device.

This is not only a great conversation piece but also a discreet enough Speaker for the home of any modern gentleman.

Why you want it: It’s pure American history, right at your fingertips. And you can actually listen to it.

Why you don’t need it: You know that guy at the party, usually called Roger, who talks about the features of his new Jaguar all the time? Yeah. You really run the risk of becoming that guy.