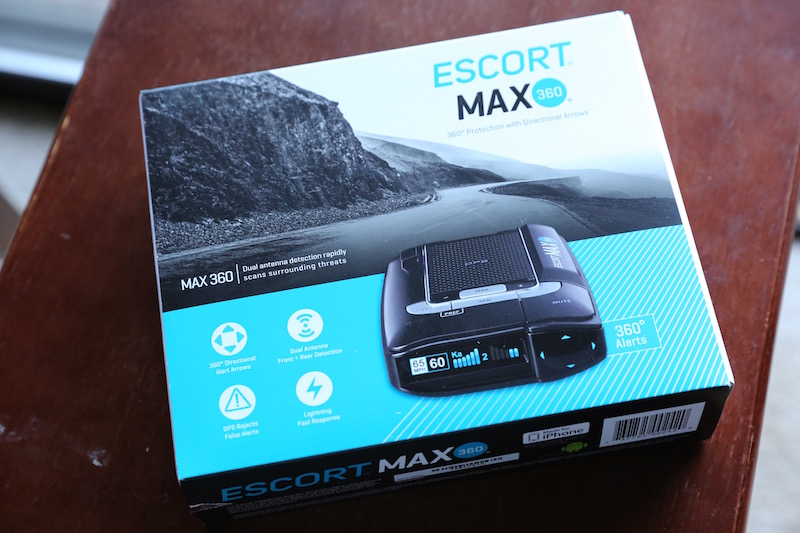 Getting Hands-On with the ESCORT Max 360 Radar + Laser Detector

This is a sponsored post written by me on behalf of Escort Radar + Laser Detectors. All opinions are 100% mine.

With there being more and more ways to get a ticket these days, it’s no wonder radar detectors are becoming more popular; a necessity even.

Escort sent me their new Max 360 Radar + Laser Detector to review and I’m glad they had. It arrived just a few days before I headed back to New Hampshire for the holidays, so I took it along with me. The Escort 360 provides full-circle threat detection from their dual-antennas, with their directional arrows instantly identifying the source. This came in handy when driving roads I’ve never driven before.

The Escort Max 360 + Laser Detector will help notify and protect you from potential tickets caused from radar and laser guns, red light cameras, air patrol, and photo radar (speed cameras). I’ve had two red light camera tickets in Los Angeles, and let me tell you that those are ones you definitely never want to get. Very, very expensive.

Whether you consider yourself an excellent driver or one that never speeds, a radar detector is worth the investment. The average driver thinks they are always obeying the speed limit, when in fact more often than not the street speed limits change and they never make the adjustment. Also, keep in mind that tickets aren’t always justified. The National Motorist Association has estimated that 1/3 speed enforcement citations are erroneous. So what does that tell you?

When I arrived in New Hampshire I installed the Escort Max 360 immediately in my rental car. Setup only took a few moments. It’s really just plug in and go. An easy to install suction cup to mount the Max 360 comes inside the to-go carrying case. Over the years, radar and laser detector technology has improved drastically. In the past I’ve used the Valentine One detector and found that it didn’t detect nearly as accurately as the Max 360. Just a few miles outside of the airport the radar detector started going off and showing me where nearby threats were.

A cool feature, and one I haven’t seen on other detectors, is the mute button. Of course you probably won’t be using this too often, but when you’re driving around familiar streets that you know like the back of your hand, it’s nice to silence the detector and not have to hear any noise come from it. Don’t worry, the Max 360 is still detecting any threats nearby when muted and will be shown on the screen.

With the National Motorist Association estimating an average of 41 million tickets being given out each year, it’s no surprise radar detectors are becoming a trendy accessory for cars. Not to mention that the price of the Escort Max 360 detector pays for itself just by simply saving a driver from getting 1 ticket. The average ticket cost is $150, and though the Max 360 is around $650+, when you include how much your insurance will go up over three years, well that’s where you’ll see how it pays for itself. Escort has been an industry leader in detectors for years now, and it’s no surprise with the power, 360° protection and unmatched precision their products provide. Escort believes in their products so much that they are offering a “Speeding Ticket Limited Guarantee” including both radar and laser speeding tickets when purchased factory direct.

To learn more about the Escort 360 and to find out how you can protect yourself from unwanted tickets, visit EscortRadar.com.