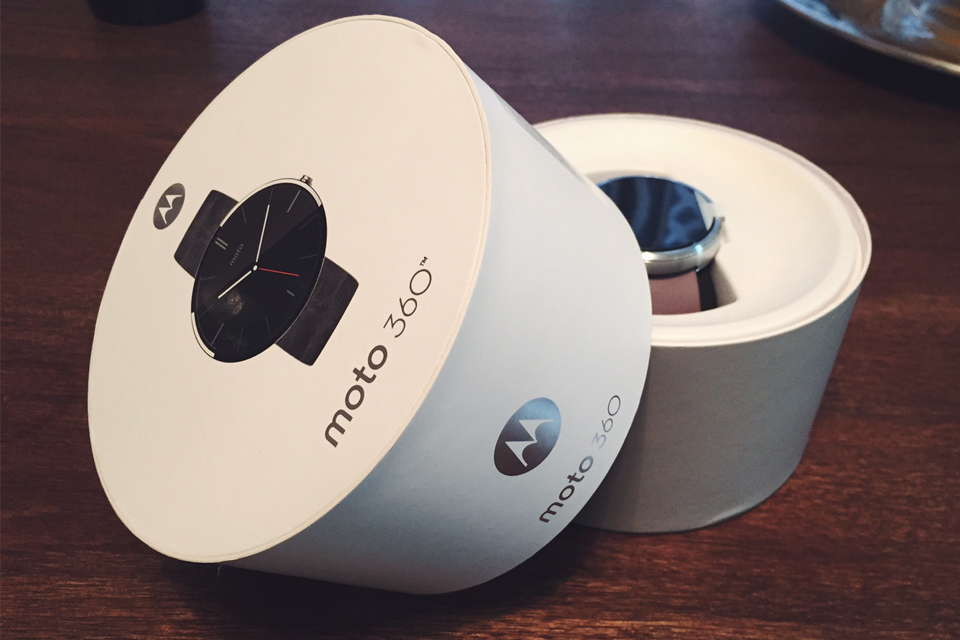 Watches have been shadowed due to the overwhelming amount of tech we have around us. Rarely will you see someone check his or her wrist when asked for the time. I was sent the Moto 360 ($250) from Motorola, and I must say, this may be the device that has me re-thinking watches. Its design, craftsmanship, and functionality is a game changer, and quite possibly the watch for our times.

Out of the Box

The Moto 360 box is circular like the watches face. It comes with a charging station, a quick-start manual, and of course, the Moto 360 smart watch. I was pleased that the packaging was limited and not packed with extra documentation we all end up throwing out. No one likes a waste.

Eager to try it out I quickly paired it to my Android device. The keyword being quickly. It synched immediately with little effort and just like that I was on my way. I should note that out of the box it wants to run an update, which requires 80% or more battery life. The update itself isn’t necessary for you to start playing with your new Moto 360. However I recommend getting it over with since it takes little to no time.

I really wanted to get my feet wet since this was my first experience with a smart watch. I’m glued to my smartphone and was hoping to find ways of using the Moto 360 in its place. While in the office I found its functionality extremely helpful. I was able to leave my phone and walk around freely knowing that any important notification I would get on my phone, would appear on my watch. Notifications included things like calendar updates, important emails, and of course texts. Being able to use the voice control function to send text messages and Googling was a huge plus. Not to mention super easy to do. A few bonus features I didn’t turn on via my smartphone but love on my Moto 360 is the health tracker. Since my watch doesn’t come off until bedtime, I’m able to track distance covered, steps taken, heart rate, calories burned, and more. This is great for someone like me who works in a job that has me glued to a computer and forgets to take walks. I set a step goal that will remind me when I’ve either reached my goal or haven’t walked enough. Smartphones can do something similar but I find I leave my phone on my desk when walking around the office and that keeps me from getting accurate tracking of my steps, calories, etc.

I noticed I started checking my watch more and more when wearing the Moto 360. Not just for the time, but also for updates from apps I normally checked on my phone. For example, Facebook Messenger and WhatsApp are huge communication tools I use day to day. Being able to check those while roaming around, with out having to take my phone out was liberating. Check out other Android Wear Apps over on Google Play store.

After thoroughly trying Motorola’s smart watch for a few days I can really stand behind the brand’s motto, “Moto 360. A Watch For Our Times.” You can learn more about Moto 360 by visiting Motorola’s site.

Disclosure: Compensation was provided by Motorola via Mode Media. The opinions expressed herein are those of the author and are not indicative of the opinions or positions of Motorola’s.