5 Magical Christmas Markets Worth Visiting in the US

It’s that time of year again, there’s a perfect nip in the air, decorations are up, and it’s finally appropriate to watch our favorite holiday movies (that we may or may not watch year-round anyway). To help get us further in the spirit, I’m excited to share with you Christmas and holiday markets found throughout the US.

I have to say, when I looked into just how long Christmas markets (or Christkindlsmarkts) had been around, I was pretty shocked. As it turns out, the first appeared in Germany over 400 years ago, with winter markets dating back significantly further. While taking a tour of the markets in Germany—honestly, Europe in general—is high up on my bucket list, I’m realistic enough to know that’s not something that will be happening soon. That said, I also don’t plan on waiting until that happens to experience that special magic. Thankfully, it turns out there are plenty of options scattered around our own country. Check out the list below to see if there’s one near you! 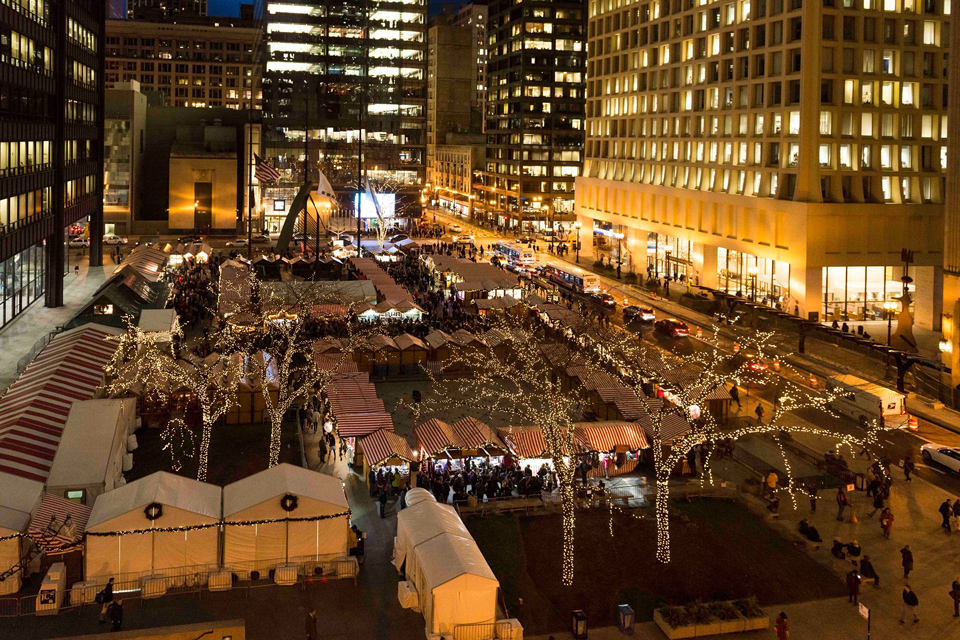 If you’re going to be in the Chicago area between November 16th and December 24th this year, the Christkindlmarket is where you want to be. With locations in the Loop, Wrigleyville, and even Naperville, you have your options in the way of convenience. Depending on which you find yourself at, expect to see dozens of vendors offering everything from handblown ornaments and cuckoo clocks to strudel and Glüwein. For those venturing to Daley Plaza on Sundays between 24 p.m., you might even be lucky enough to catch a glimpse of their very own Christkind, a “fairylike being dressed in gold and white robes with a crown upon her golden locks”—the giver of gifts in most German-speaking countries. 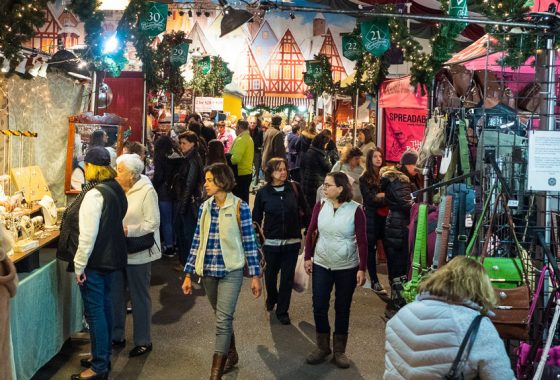 Unsurprisingly, one of the best and most significant markets in the country is located in a town called Bethlehem. Those from the Keystone State are surely already familiar with the extravaganza that is the Christkindlmarkt, but, for those of us outside of Pennsylvania, know that it’s impressive enough to earn the town the nickname of “Christmas City.” In addition to goods from over 150 incredible artisans from all over the nation, visitors can also look forward to live Christmas music, ice carving, and glassblowing demonstrations. If you’re looking for a little something extra, you can even have breakfast with St. Nicholas, pending the purchase of an additional ticket. The market runs through the weekend before Christmas, so you still have plenty of time to plan your trip and snag some unique gifts and experiences from one of the most exciting Christkindlmarkts around!

For a more Americanized—but still completely awesome—take, there’s the Downtown Holiday Market in Washington DC. Art, clothing, sweets, and antiques are just a small sample of the variety of wares that can be found there. While this market happens to be open every day of the week, exhibitors’ participation varies. So, if you had a special one in mind, be sure to check ahead of time to confirm they’ll be there. Of course, should you get your wires crossed, there’s always the Smithsonian right behind you (also, all of the other spectacular shops). You really can’t lose. 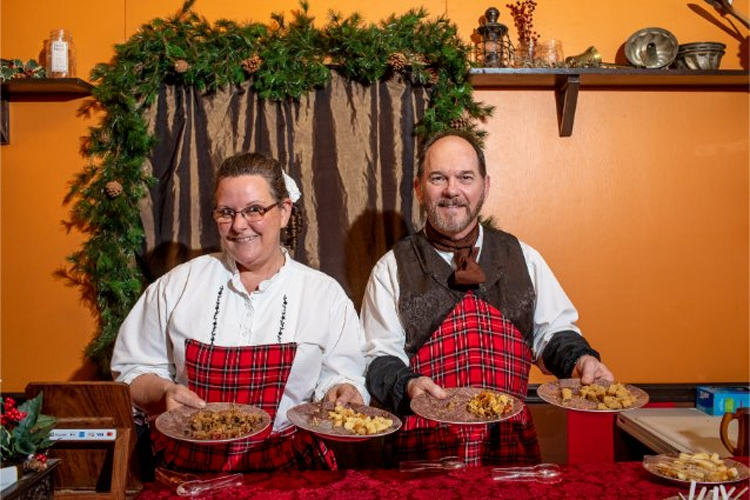 Making their mark on the Christmas market scene is The Great Dickens Christmas Fair in San Francisco. Instead of pulling their inspiration from the classic German roots, they take you back to the enchanting atmosphere of Victorian London. While $30 for admission might seem a bit steep compared to others on this list, keep in mind that there’s an entirely fair included with this market. From bustled gowns to pewter cups, every shop is chockfull of what one might expect to nd while walking the streets of nineteenth-century Britain. Lovers of English food will be happy to know the staples—like roasted chestnuts, tea and scones, bangers and mash, and meat pies— are all readily available. Anyone wanting to take a more passive approach to their experience won’t be disappointed either. Their variety of shows range from musical numbers and Scottish & Irish dancers to scenes from Dickens’ A Christmas Carol and cancan performances. They might be one of the only ones around doing the Victorian thing, but they’re certainly doing it right. 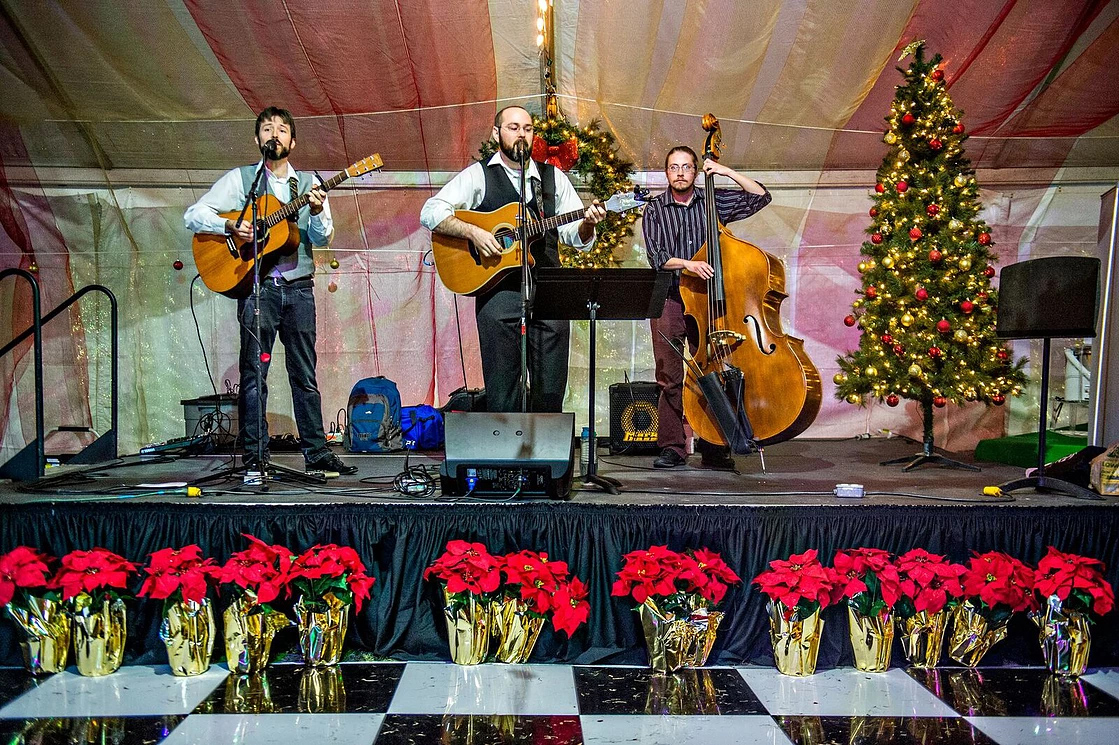 While the Denver Christkindlmarkt isn’t the biggest around, it still has plenty to offer in the way of winter holiday vibes. Live, traditional music (with dancing encouraged!) can be found every day throughout its run. When you get hungry, Central and Eastern European drink and fare, from schnapps to Knödel, are everywhere you turn. And, as for shopping, between textiles from Tibet and Ecuador, nutcrackers and nesting dolls from Germany and Ukraine (respectively), and Christmas trees and handblown ornaments from right around the corner, you basically have the world within arms reach. The Denver Christkindlmarkt runs every day of the week from mid-November through the weekend before Christmas.