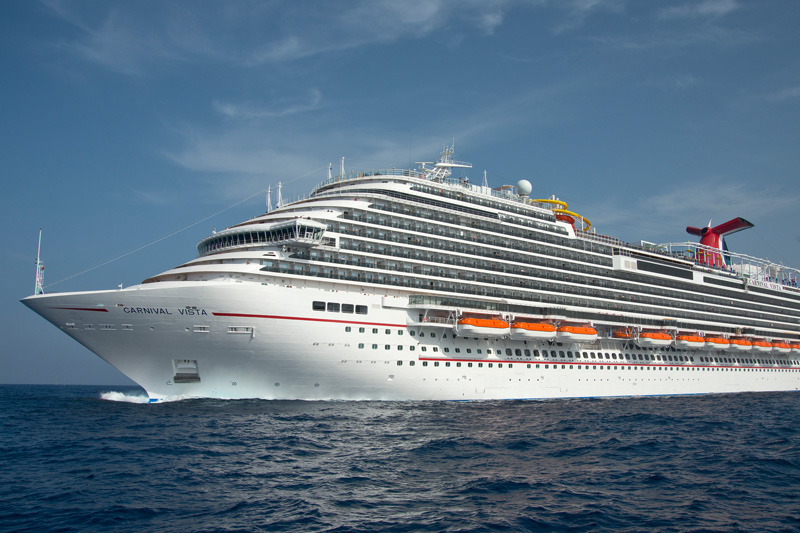 The Carnival Vista made its inaugural trip this month, and with it came a number of new entertainment and thrilling experiences for guests to enjoy. I had the pleasure of checking them out firsthand on its second sailing in the Mediterranean, starting in Barcelona and ending in Athens, Greece. Below are a few of the new highlights on board Carnival Cruises’ newest fun ship.

There’s a lot to do on a cruise ship, and one might never think of watching a movie while on vacation, but then again, they never had an IMAX theater at their disposal. Carnival Cruise Lines has partnered with IMAX to bring the first ever IMAX screen to sea on board the new Carnival Vista. First IMAX theater at sea, on board the Carnival Vista

The IMAX 187-seat theater is part of the Carnival Multiplex, which also includes the Thrill theater, a unique experience with seats that move back and forth and side to side, while spraying viewers with water and bubbles to make them feel like they’re part of the picture. Exclusive to the Vista ship is Thrillogy, a spooky multi-sensory horror movie experience, designed for guests 17 and older.

What might be even more impressive than having the first IMAX Theatre at sea is the movies they play. For example, while I cruised on the ship, I had the pleasure of watching Jon Favreau’s Jungle Book in 3D IMAX, a film that released just a week-or-so prior. They also had Batman vs. Superman and other current blockbusters that are still in theaters.

IMAX Theatre tickets are $12.95 for adults and $9.95 for children 12 and under and guests 55 and over. IMAX documentaries and Thrill Theater tickets are $5.50 per person.

Another first for the cruise industry is the SkyRide, a pedal-powered aerial attraction that will give guests the best seat on the ship. Created by the founder of Rollerblade, riders climb into a hanging bike where they cycle around the 800-foot suspended track, while enjoying beautiful panoramic views 150 feet above the sea. Lining up next to the SkyRide is the SkyCourse, a suspended ropes course with easy and hard levels. I recommend trying the easy first if you’re a little squeamish when it comes to heights. Both are a lot of fun! Me rocking the hard side of the SkyCourse. NBD!

In the WaterWorks water park, the largest in Carnival’s fleet, you will find water slides that are for both kids and kids at heart (me). The Kaleid-O-Slide is Carnival’s first water tube attraction, taking one or two-persons on a raft through a 455-foot adventure, featuring twists and turns in a tube with kaleidoscope visual effects. Next to the new tube water slide is Carnival’s classic Twister slide, offering 300 feet of high-speed fun. Pro Tip: If you want to go fast, lay as flat as you can. You’ll shoot through the tube like a bullet. One of the best things about a cruise ship is the onboard entertainment. On the Carnival Vista, three-new Playlist Productions shows have been added, featuring amazing special effects, LED staging and live performances. The three shows include: Amor Cubano: A Caribbean Dance Romance, America Rocks!, and Flick: The Power of Motion Pictures.

If you’re looking to get the juices flowing while at sea, I recommend catching Amor Cubano. This show is fun, and will have you on your feet in no time, with their blend of Latin songs and today’s hits. Their seven-piece Cuban-inspired band performs songs by Gloria Estefan, Celia Cruz and others, on a stage reproduced to look identical to Carnival Vista’s Havana Bar. High-energy is an understatement when describing this show. I mean, who doesn’t get amped when some of the world’s top rock anthems are played from American artists like Aerosmith, Styx, Kiss, Bruce Springsteen and more? Flick: The Power of Motion Pictures

Flick is a celebration of filmmaking. From classics like Footloose to Dirty Dancing, the main character, aptly named “Flick,” takes viewers on a journey through different genres of film with theatrical illusions and cinematic effects.

After you’ve caught all the awesome shows mentioned above, I recommend spending a few nights in the 385-seat Punchliner Comedy Club, which offers both family-friendly and adults-only shows. There’s also Hasbro, The Game Show, which is a take on the Hasbro games we all know in love, in a larger-than-life fashion. This is a lot of fun even if you don’t have any little ones with you.