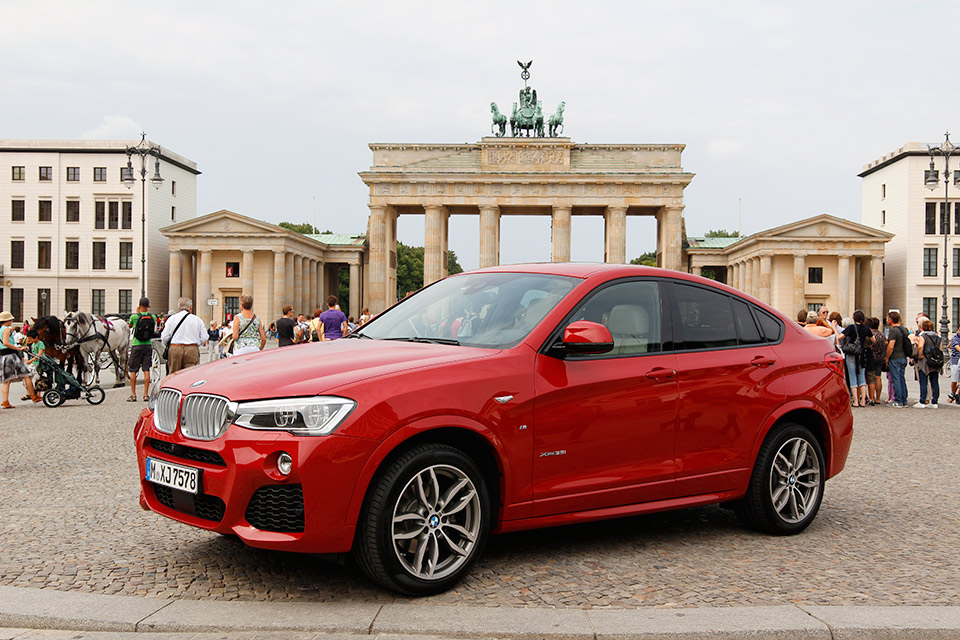 If I were to define my perfect trip it would involve exploring a new city, eating good food, and enjoying the company of the locals. BMW not only gave me this, they added a new country to stamp in my passport, as well as the perfect chariot to adventure the city in. This is how I experienced the Berlin Lifestyle in the BMW x4:

From Los Angeles to Berlin

My trip to Berlin was an exciting one. Despite what many of my readers might think, I don’t travel out of the US often. Living in Los Angeles gives me the chance to attend many events, but my passion is travel, so living out of an airport is something I welcome.

When asked if I would fly to Germany, spend a few days with the new BMW x4, and explore the Berlin lifestyle — something I’ve heard so much about — I didn’t hesitate in saying an enthusiastic “YES”. With my agenda in hand, I started packing my gear and then I was off. Have you ever heard of the Carloft Apartments before? The Carloft, in a nutshell, is an architectural masterpiece that I had the privilege of occupying while in Berlin. Why you ask? I’ll let this image do the talking: If you can’t tell from the photo, that’s the BMW x4 I got to drive around Berlin. That’s right, a car in my third story flat just waiting for me to take it out for a spin. No need to park on the streets, just drive it up to the lift and you’re in your apartment. Frank Dittel is the designer of this particular Carloft apartment. You can see some of his handy work in the gallery below:

Exploring Berlin in the BMW x4

From food to beer, and everything in between; Berlin is one amazing city. On this trip, I was fortunate enough to be paired up with Thang (electru.de), a bad-ass Berlin local that has his finger on the pulse for what’s hot and what’s not. Our first meet-and-greet took place just a few blocks from the Carloft at Katie’s Blue Cat, a lovely spot to grab a flat white and delicious homemade baked goods. Here is where our friendship began, over caffeine and some light people watching. After breakfast we headed over to BMW Niederlassung Berlin where we would pick up the BMW x4, our ride to get us from point A to point B the next few days. It was a cherry red beauty. The reps at BMW were nice enough to show Thang and I some of the cool features the new x4 had to offer. My personal favorites were the Connected Drive and Surround View. The latter creates a satellite-like view of your surroundings. At first I thought it was witchcraft, then I remembered we were in a BMW. More on the x4’s features to come.

Immediately after picking up our ride from BMW, Thang thought it would be ideal to grab a little grub before our full-day of activities began. We stopped at Curry-Mitte where I had my first, but certainly not my last, currywurst. If this is what fast food is like in Berlin, I’m in trouble. After filling our bellies with steamed pork sausage, we ventured over to fashion label Barre Noire, created by designer and founder Timm Süßbrich. We sifted through his past and future collections, while chatting with him about his work and what the future holds for Barre Noire. His fox sweatshirt is killer: Timm from Barre Noire showing us his collection // Photo by Thang, electru.de

Our next stop on the road trip was over to another designer’s studio, Aleks Kurkowski. We got there with very little trouble thanks to the x4’s easy to use navigation system. Upon arriving, Aleks greeted us with open arms and a gift, a hired model to show off her collection. We took advantage of the opportunity and created an impromptu photoshoot in front of the car: If you’re a local, or just passing through Berlin, stop by the trendy Bikini Berlin to shop both Barre Noire and Aleks Kurkowski latest collections.

Our fashion road trip was complete, and now it was time to explore Berlin like a tourist. We hopped back in our red BMX x4 and started to drive. Thang took us to a few of the local hotspots where tourists usually swarm. Like the Brandenburg Gate (first image in article) and the East Side Gallery, a 1.3 km long section of the Berlin Wall that features 105 paintings by artists from around the world. After snapping a few fun shots in front of the famous wall, we explored other parts of the city by foot: My first trip to Berlin was a success! A huge thanks to BMW and the amazing BMW x4 for getting me around town, as well as Thang for showing me around his city. I plan on posting a bit more about the BMW x4 and its extensive list of specs. A video is currently in the making of our adventure around Berlin, so stay tuned for that as well. In the meantime, I recommend you checking out these other articles written by bloggers on the trip.

Disclaimer: This trip was made possible by BMW. All opinions are mine.