Discover the Glass of Thrones Trail Around Belfast

Game of Thrones will forever go down in history as one of HBO’s greatest shows. No matter how disappointing the ending may have been.

The fine folks at Tourism Ireland have put together an in-depth three-day Game of Thrones walking tour (aka. Glass of Thrones) around Belfast that will surely excite any true fan of the series. This unique walking tour is 7-miles in length, where you will discover the Glass of Thrones, a series of 5 stained-glass windows showcasing some of the most iconic scenes from the world of Westeros.

Did you know: Northern Ireland is home to more Seven Kingdoms locations than anywhere else in the world.

Here is the 3-day itinerary from Tourism Island:

Get a flavor for Belfast’s food scene, explore the Game of Thrones® tapestry and marvel at the epic moments of the mighty Lannisters.

A Taste of the Lannisters

ICC Belfast (formerly Waterfront Hall) is one of Belfast’s most popular entertainment venues, so it’s no surprise the cast and crew of Game of Thrones® held their wrap party here after the final season. The Lannister window glows in shades of yellow and red, with a splash of green depicting the wildfire explosion at the Sept of Baelor. Foodie heaven awaits just around the corner at St George’s Market where artisan cheeses, cured meats, handmade chocolates and a host of vintage curios are available.

Pick up a Black Taxi Tour and let a Belfast native drive you around the city’s historic murals and top attractions.

30-minute walk between both locations

The Ulster Museum is home to the Game of Thrones® Tapestry a 77-meter-long medieval-style masterpiece that illustrates the history of the Seven Kingdoms, season by season. Hand-woven and hand-embroidered, the tapestry is made from linen sourced from one of the last surviving linen mills in Northern Ireland.

IF YOU HAVE MORE TIME

Get lost in nature amid fragrant flowers and lush greenery at the Botanic Gardens right outside the Ulster Museum. 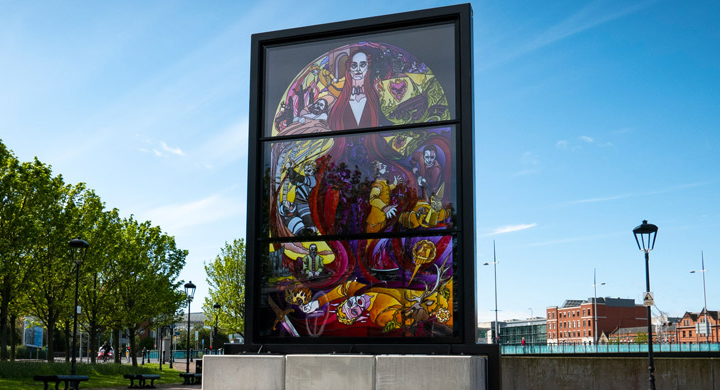 The best (and worst) of House Baratheon, creative culture and a dragon Queen flanked by fire and blood – allow Belfast to spark your imagination…

A Bridge to the Baratheons

At the Lagan Weir bridge you’ll spot the Baratheon window. Dominated by the mystical Red Woman and Renly’s shocking assassination, this is a stained-glass window colored in bloody magic. Stop by the Lagan Lookout Visitor Centre for sweeping views of the city across the river and stroll over to the Cathedral Quarter where a treasure trove of culture and creativity are in store.

Step aboard the Belfast Hop On Hop Off to see even more of the city.

30-minute walk between both locations

A Feast for the Eyes

Walk along the quaint cobbled streets to St Anne’s Cathedral and admire the soaring pillars, detailed mosaics and elaborately carved stonework of this hallowed landmark. Writer’s Square is across the road, where quotes from famous local writers including CS Lewis, Hanna Bell and John Hewitt are etched into the stone pavement. For a dose of artistic inspiration, visit the the MAC (Belfast’s Metropolitan Arts Center) where you can enjoy dynamic changing art exhibitions in the center’s three galleries any time, free of charge.

Stop off for a drink at the characterful Duke of York pub – a favorite of locals and tourists alike, which oozes with traditional charm.

14-minute walk between both locations

Silver-haired Daenerys reigns supreme on the Targaryen window, along with her dragons, a molten gold “crown” for her ill-fated brother, Viserys and the ancestral seat of House Targaryen – Dragonstone. You’ll find the Targaryen window outside The Odyssey, Belfast, Northern Ireland’s biggest indoor arena, which plays host to sports events and world-class entertainment throughout the year. Book lovers should walk over to CS Lewis Square, where the writer’s home town pays homage to his captivating imagination with statues of characters from the Chronicles of Narnia.

Check out the collection of handmade crafts at The DOCK Market, where local designers, artists and crafts people display their wares. 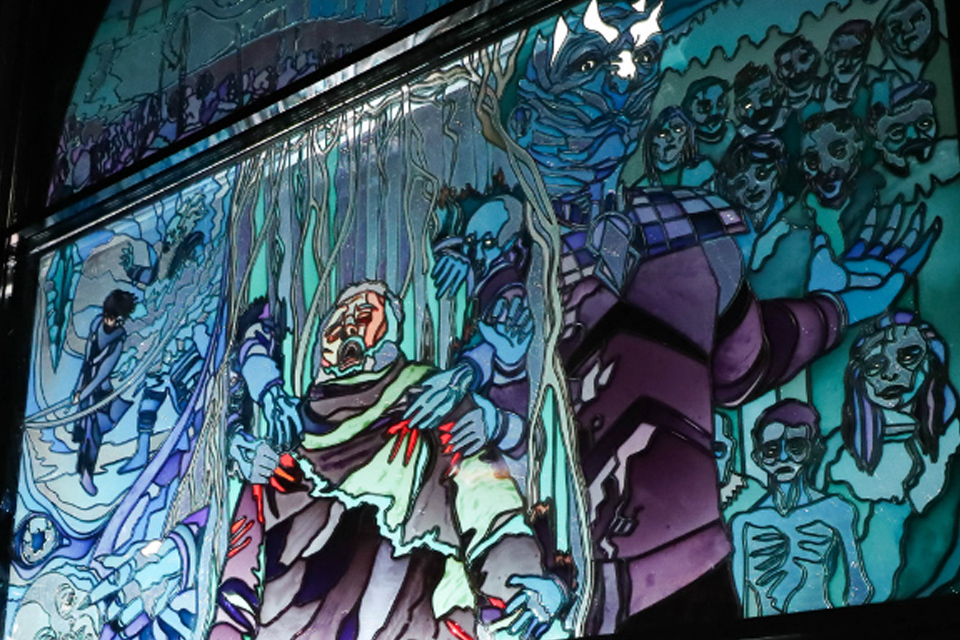 Belfast’s Titanic Quarter is now the home of ice and fire – expect a voyage of discovery spanning Titanic’s sorrowful story and the creation of a Game of Thrones® legacy right here in Northern Ireland.

In the heart of Belfast’s Titanic Quarter, right outside the SS Nomadic – the world’s last remaining White Star Line ship – you’ll spot the White Walkers window, depicting the terrifying army of the dead along with their ruler, the fearsome Night King. Be sure to delve into the history of Belfast’s shipbuilding heritage at Titanic Belfast, where interactive exhibitions tell the story of the famous liner, from dream voyage to tragic shipwreck.

Go on a Titanic Discovery Walking or Boat Tour to learn more about Belfast’s Titanic history.

6-minute walk between both locations

Ready to Play the Game of Thrones?

Welcome to the final Glass of Thrones window. Here, the new reigning sovereign sits on the Iron Throne – the triumphant leader of the Seven Kingdoms and enduring reminder that Northern Ireland is Game of Thrones® territory. The window is located beside the Titanic Slipways where the ship’s tragic journey began. Walk the slipways and shipyard and explore a life-size blueprint of the ship’s promenade deck, etched in white stone underfoot.

Take the interactive, self-guided tour of HMS Caroline, the last surviving ship from the World War I Battle of Jutland.