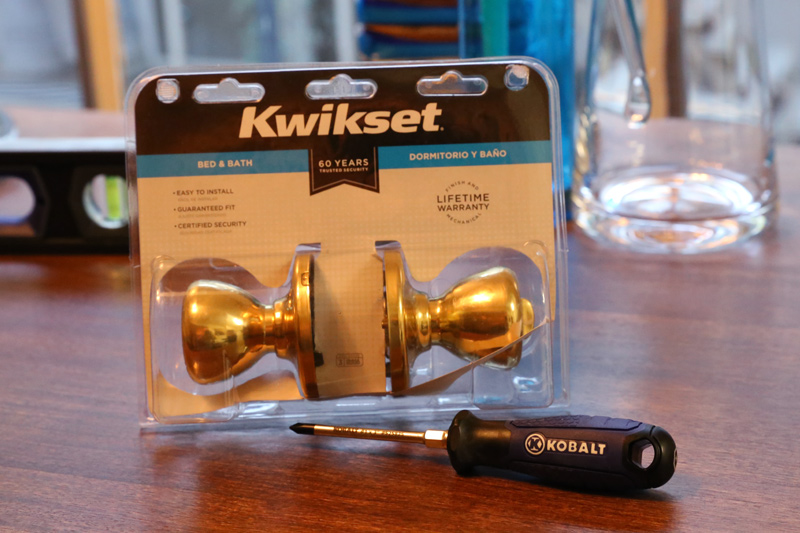 How to Change Your Bedroom Door Knob

Whether you consider yourself handy or not, chances are you haven’t changed a door knob before. It’s one of those items you use everyday and take for granted what exactly goes into it. I for one never even thought about what was required to change a knob or what tools I would need until my girlfriend brought up wanting to change our bedroom knob. She wanted to replace our current one with one that had a lock on it so she felt more secure when I was away on business.

I decided to head down to my local Lowe’s and pickup a few supplies. Believe it or not the tools required are very minimal. In most cases all you really need is a Phillips-head screwdriver and a new door knob kit. However, as most things never go as planned, you may want to make sure you have a set of pliers and a rubber mallet. I’ll explain the need for those later.

Since I was due for a set of new tools I decided I would pickup a few things from Kobalt, along with a bed and bath door knob from Kwikset. Here is a list of what I bought:

As I mentioned before a rubber mallet might come in handy, but I already had one so there was no need to buy one at Lowe’s.

Everyone has a different living situation, so I can only share with you my experience changing a door knob for the first time. I live in a quaint two-bedroom apartment in Los Angeles, which like most, haven’t had the tender loving care it deserves. Let’s just say their solution for home improvement is to paint over everything, as the photos below are evident of that. Sometimes when things are being painted over, the door knob and its accessories get embedded into the paint and secured into the door. This makes it difficult to remove with only a screwdriver, which is why I recommended having a set of pliers and a rubber mallet on-hand.

As you can see from the photo below, I had to use the pliers to remove the mortise plate. It was embedded into the door after being painted over multiple times. Other than that, I simply unscrewed the door knob using my new Kobalt Screwdriver. Similar to the mortise plate, the door knob itself was stuck so I gently tapped it with the mallet until it broke free from the door. The last thing to go on was the latch strike. Unfortunately, due to the horrible work done on my apartment prior, there has been multiple screw holes made into the door, which made it difficult to install mine. I’m sure this won’t be the case for many of my readers, but I would suggest testing various positions before screwing in your new latch strike. Don’t assume it’s the same exact size of your previous unless you ended up buying the same model as before. And that’s it! The entire door knob change took only 10-minutes, and was surprisingly one of the easiest home improvements I’ve ever done. If you’re looking to do some home improvement and need some inspiration, I recommend checking out Lowe’s Instagram account. There you will find all sorts of fun DIY ideas and ways to make your home the best it can be.

Visit Lowe’s Store Locater to find a Lowe’s near you and get shopping!

This post was sponsored by Lowe’s. All opinions are my own.