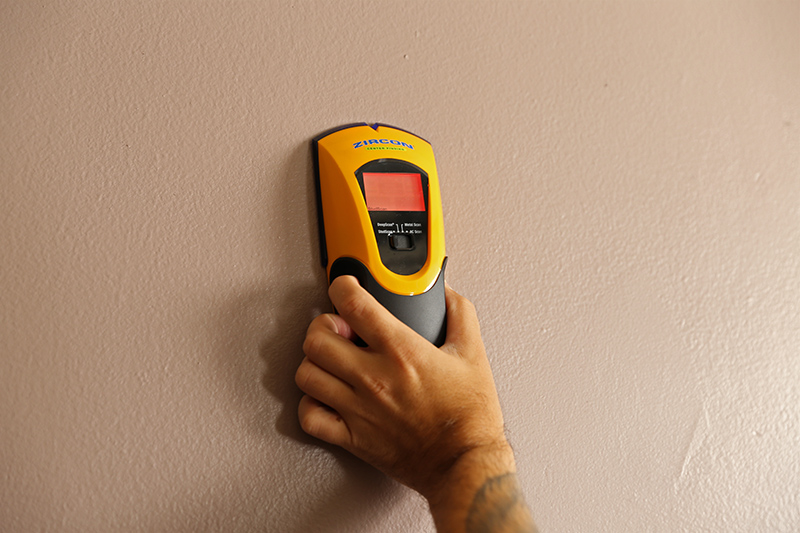 How to Find a Stud in Your Walls

If you have ever tried hanging a heavy object before you know that the best way to do so is by having the fastener secured into a stud. This assures your heavy object will remain secure to the wall. Continuing my partnership with Lowe’s, I decided I wanted to hang a few floating shelves over my bar area, so finding studs was a must!

Studs are simply the framing elements in your home that supports the walls. Typically they are spaced 16 or 24 inches on the center and run between the floor and ceiling. Drywall is then attached to the edge of the studs. As mentioned before, heavy objects don’t do well when attached to the wall itself, so a stud is your best bet to knowing you secured whatever you’re hanging — in my case floating shelves.

2 Ways of Finding a Stud

The two most common ways of finding a stud is either using the manual method of banging your knuckles against the wall or by using an electronic stud finder. Both ways work just fine, however depending on who you ask one might have a stronger opinion towards another.

Once you have turned on and calibrated your Stud Finder, you simply move it slowly down the wall until you hear a beep, or in some cases the screen says you have found a stud. The hardest part of using an electronic stud finder is being sure it’s calibrated correctly. Once you have that set it’s smooth sailing.

Knocking on Walls to Find Studs

Try tapping on a wall with your knuckles and listen to the sound change as you move down the wall. You will notice that an area with no stud has a low, hollow like sound. Tapping over a stud area will produce a higher tone with a more solid sound. It’s a pretty straight forward way of finding a stud that many have used in-place of an electronic stud finder.

Similar to the ‘How to Change a Door Knob‘ post, this was a project I’ve never done before and wasn’t sure I had the proper tools needed to get the job done. So I took another trip to my local Lowe’s store in Los Angeles and picked up a few supplies. Here’s what I bought:

After getting the supplies I needed at Lowe’s I started by clearing off my bar area and finding exactly how high up I wanted the shelves to be. Here is a before picture of what the bar area looked like before installing the floating shelves. As you can see there was a lot of empty space to work with. I ended up starting the first shelf just a little over a foot above the table top. This provided me plenty of space to put items under the shelf without having it look too cluttered.

Outside of using the stud finder to find where we would secure the shelves, the main items I used was the Kobalt Power Tool Set, Level, and Drive & Drill Set. Surprisingly the entire process only took me an hour from start to finish. For someone who has never put up shelves before I thought that was pretty fast, but what do I know?

Scroll down to see what the bar looked like before and after I put everything back, including items on the new floating shelves. I recommend you heading over to Lowe’s Instagram account and following them if you’re in need of any home inspiration. Some future projects I’m planning on doing in the new year is credited to their killer photos, and all of the tips and tricks they provide on their social. You’ll love it!

This post was sponsored by Lowe’s. All opinions are my own.