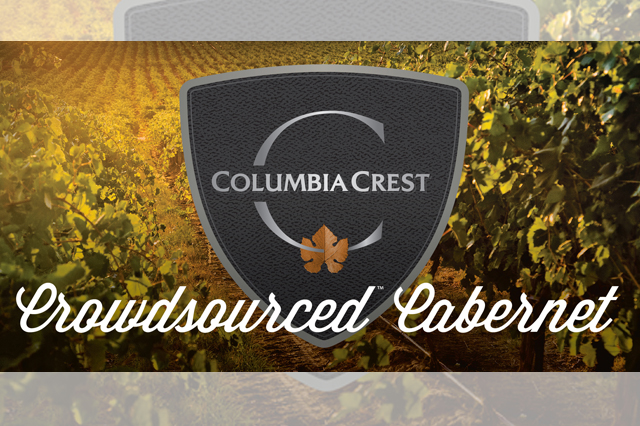 You might remember last year when I worked with Columbia Crest to get the news out about their Crowdsourced Cabernet campaign. By using their online portal, fans of Columbia Crest were able to vote on the next steps of the winemaking process. This included everything from what type of barrels would be used in the winemaking to when head winemaker Juan Muñoz Oca would pick the grapes.

While the 2014 vintage is busy aging in barrels, the Columbia Crest community is called upon yet again to help make decisions on the next step in the Crowdsourced Cabernet journey. First, Columbia Crest will not only expand the campaign throughout 2015, but they’re also adding a 2015 vintage and will grant one lucky fan a chance to play a big role in the winemaking process. Similar to last year’s voting, fans will be able to participate in weekly voting decisions for both the 2014 and 2015 vintages online at CrowdsourcedCabernet.com and, new for this year, choose the label design for the 2014 vintage.

“A wine label is much more than a beautiful piece of paper glued to a bottle,” Contino said. “The label represents the heart of the brand. I’m honored to be part of such a unique process and to be able to capture the essence of the Crowdsourced Cabernet community in my designs.”

The Crowdsourced Cabernet community will vote for one of three wine labels created exclusively by Jon Contino Studio. As of today, June 22, 2015, the label designs have gone live on CrowdsourcedCabernet.com, and fans will be able to vote for their favorite through July 3.

I bet you thought that was all the announcements for today, right? Columbia Crest added something that may be even more awesome than the campaign itself. Crowdsourced Cabernet followers will have the opportunity to apply for an honorary E.C.O. position, aka “Executive Crowdsourcing Officer.” The E.C.O is a killer position that includes representing as an ambassador for the online crowdsourcing community, travel to Columbia Crest Winery in Paterson, Washington, and working alongside head winemaker Juan Muñoz Oca to help create the 2015 vintage. Applications are being accepted through an open entry video contest.

“The response from year one of the Crowdsourced Cabernet program was so positive we wanted to continue with year two and another vintage,” Muñoz Oca said. “The E.C.O. contest takes the virtual experience and makes it a reality for someone who is a wine-lover, doesn’t mind getting their hands dirty, and who really wants to discover the process of winemaking.”

Having little to no knowledge of wine is ok, they just ask you have a taste for the stuff. I think that goes without saying. The winner will be awarded the title of E.C.O., and as mentioned before, visit the Columbia Crest Winery during the 2015 harvest season in September. Oh, and did we mention a $2,500 prize and more? Entry details can be found on CrowdsourcedCabernet.com.