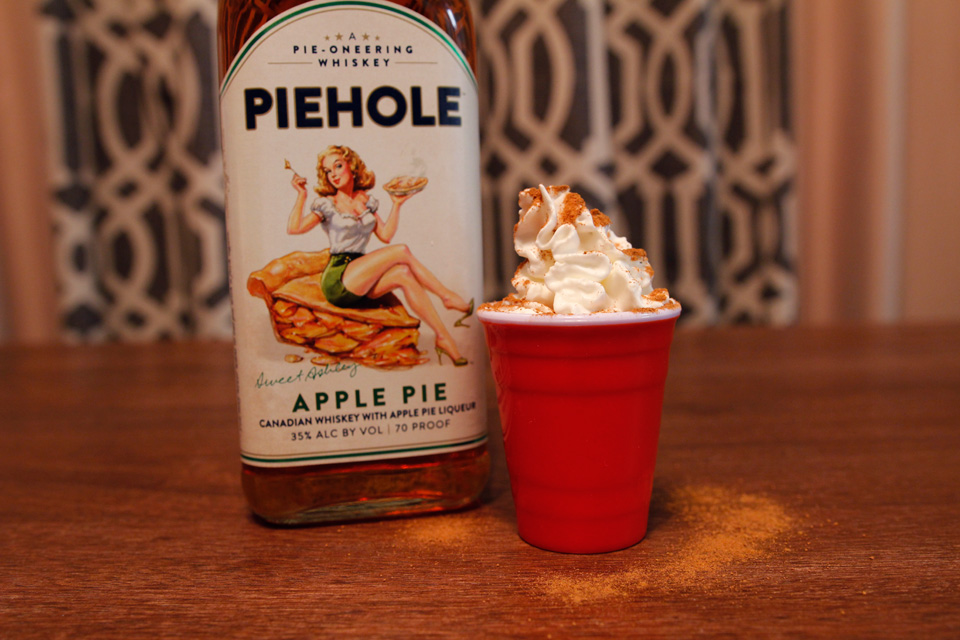 Piehole Whiskey is a blend of pie-flavored liqueur and Canadian Whiskey. They challenged me to create an original recipe using one of their three whiskeys: Apple, Pecan, or Cherry Pie. The catch — because it wouldn’t be a challenge if there wasn’t some sort-of twist — is the recipe must include no less than two of the unconventional ingredients they sent over, which included: cranberry sauce, cream cheese, marshmallows, pumpkin, whip cream, walnuts, raisins, and apple cider.

Since Piehole Whiskey is inspired by Grandma’s homemade pies, I figured why not do a shot that tasted like the pie I grew up on. As a kid I remember having warm apple pies with lots of cinnamon and the added bonus of marshmallows. Below you’ll find my original recipe for the Piehole Whiskey Cinnamon Apple Pie Shot. Cheers! Combine the Apple Pie flavored Piehole Whiskey, Apple Cider, and a few ice cubes into a shaker. Add a dash of cinnamon and stir. Pour into shot glasses, leaving room at the top. Finish off with a healthy amount of whipped cream, dash of cinnamon, and a mini marshmallow (optional).