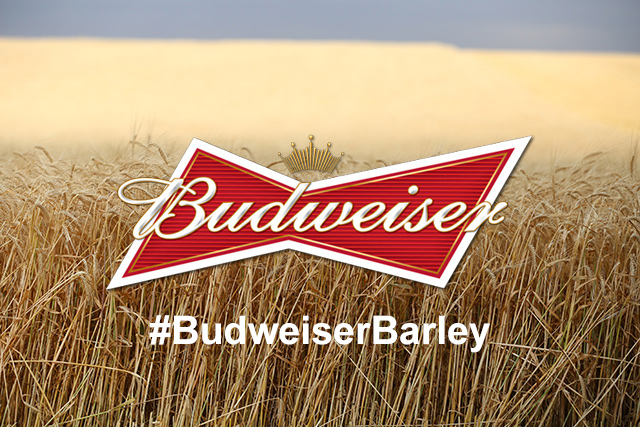 A few weeks back I woke up to an email about barley. It was an invitation from my friends at Anheuser-Busch, who asked if I would like to join their Behind the Scene with Barley, aka #BudweiserBarley media trip. I’ve previously visited Budweiser’s headquarters in St. Louis, where I got to tour the entire brewery and even see where they do their weekly taste tests. Real official business. Naturally I said yes to this trip. Our barley journey started out in Jackson Hole, Wyoming. I assumed this was because it was the most convenient airport to fly into, or perhaps A-B just wanted us to see the beautiful sights of Wyoming. I like to think it was the latter. Here’s proof: View from our hotel, the Teton Mountain Lodge We were put up at the Teton Mountain Lodge, which if you have never visited before is a must. The photos above were taken shortly after I took the free gondola to the top to grab a beer — Budweiser of course. It was no more than a few hundred feet from the entrance of the lodge.

After doing a bit of exploring, I met everyone back down at the lodge for the opening reception dinner. There I caught up with a few of my fellow men’s lifestyle blogger friends, as well as some beer experts. You could tell they were eager to go behind the scenes with barley.

What was for dinner? Bud & Burgers, that’s what. Wyoming does have some pretty top notch beef, so why not? The candied bacon that Teton Mountain Lodge’s restaurant cooks up is pretty out of this world. After we all had our fill of meat and beer, we headed down the side walkway outside of the restaurant and towards the center of the village. During the summer both the lodges and locals join together to create an outdoor concert series that happens a few times a month. Everyone was drinking and having a great time. The barley used in Anheuser-Busch beers is some of the highest quality grain grown, and an essential part to the beer making process. Budweiser took us an hour outside of our hotel into Eastern Idaho to the Clark Hamilton Farm, so we could get a first-hand look at the barley making process. There we walked the barley fields and listened to Clark Hamilton speak about his harvesting process and the rigorous quality control that goes into making sure each kernel is worthy of being malted. Hamilton has close to twenty years of experience as a third generation grower, with the bonus assistance of A-B’s SmartBarley Program, an online benchmarking tool. The program enables growers in Idaho an inside look at what a European farmer facing similar conditions might do to get the best results from a crop.

A special resource that is part of the SmartBarley program is the AgriMet weather-data tool. Hamilton’s son, Jordan – also a barley grower – is hopeful that the AgriMet technology will help his family better irrigate fields to save water while increasing crop fields, all-while lowering costs. “Because we have been blessed with some good rain this season,” he explains, “we have not had to irrigate — but the AgriMet still extrapolates soil information.” After having to be yanked from the barley fields like a kid in a candy shop, we said our goodbyes to Clark and headed off to our private lunch. Ok, that’s enough of the food photos. Back to what this article is really about — BARLEY!

After our delicious lunch and beer tasting, we headed over to the Budweiser Idaho Falls Malt Plant. Here we dived deeper into barley and took a private tour of the test plots, participated in a wort tasting (better than it sounds), and had the pleasure of meeting some of the fine people that worked there. When it comes to selecting the ingredients that go into Anheuser-Busch products, quality is, and has always been first. To quote Adolphus Busch, “You can only make a good thing out of good products; therefore, stick to the motto that the best ingredient is not too good for our beer.” This motto holds true for both A-B employees and their farmers.

A big thank you to Anheuser-Busch, and everyone that works on Budweiser for allowing us a Behind the Scenes look at barley. The trip to Wyoming and Idaho was extremely fun and one I’ll never forget. Not to mention educational.

Disclosure: A-B provided me with a complimentary trip to its Malt Plant, but did not pay me to go on this trip.