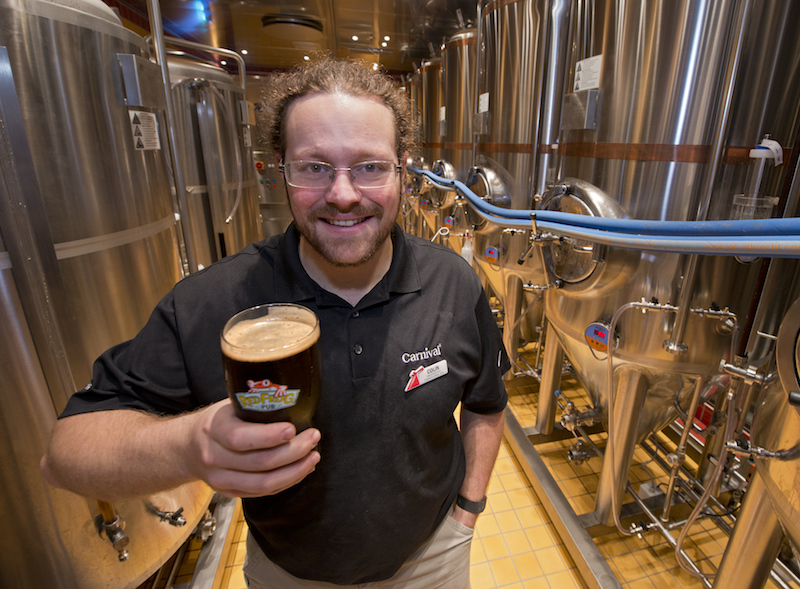 If you like craft beer and cruising, you’re going to love what’s in store on board Carnival Cruise Line’s latest ship, the Carnival Vista. The Vista is not only their largest and most innovative ship to date, it’s also the first North American ship to house a craft brewery. Guests will have the opportunity to try hand-crafted beer that was brewed on board, courtesy of Carnival’s new partnership with Miami-based Concrete Beach Brewery. Concrete Beach has worked closely with Carnival to create original recipes that will woo both new and returning guests of the RedFrog Pub & Brewery. They sourced the finest ingredients to produce three craft beers. Those beers include ThirstyFrog Port Hoppin’ IPA, ThirstyFrog Caribbean Wheat, and FriskyFrog Java Stout.

“We’ve been working for months with these talented partners who have helped us create three exciting and unique craft beers for Carnival Vista and our guests absolutely love them,” said Eddie Allen, Carnival’s vice president of beverage operations.

During my trip on the Carnival Vista, I had the pleasure of testing all three beers. I particularly liked the ThirstyFrog Port Hoppin’ IPA. It has the aromatic floral and hoppy scents you look for with an IPA, with passion fruit and citrus overtones. As for the ThirstyFrog Caribbean Wheat, this is an unfiltered lager with aromas of bananas and spices. The third beer, FriskyFrog Java Stout, is a take on a traditional stout – rich and creamy with hints of coffee. Sarah from MilkandFlowers.com grabbing for one of Carnival Vista’s craft beers

“It was an honor to be a part of this one-of-a-kind project, and we feel like we created a great variety that is sure to please guests,” said Jon Carpenter, Concrete Beach Brewery Brewmaster. “It’s common for vacationers to want to test out the local beer and Carnival Vista has taken the concept of local, and applied it to the decks of their ship.”

Now that Carnival has successfully made a craft brewery on board their new Carnival Vista, the question remains whether or not their entire fleets will get retrofitted with breweries. I think it would be a huge selling point for those who tend to spend a lot of time in the RedFrog Pub when they’re cruising on Carnival ships.

If you want to see what else Carnival’s new ship has to offer, check-out the #CarnivalVista hashtag on Instagram and Twitter to see what guest’s are posting.