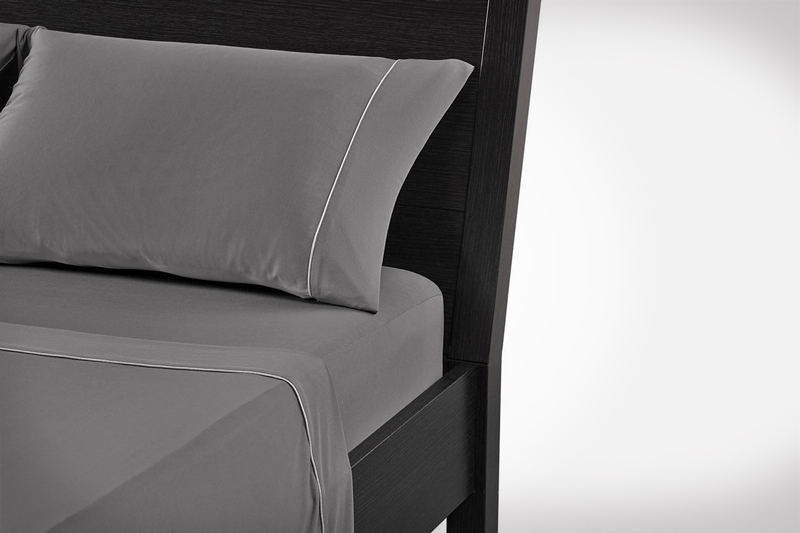 A few months ago, my girlfriend and I finally made the decision to make the bed upgrade from my college Ikea set to a proper adulating one. Since then, we’ve been going crazy replacing one thing after another. We started with a new, bigger bed; we’d been having some issues with hitting each another in the face randomly through the night, so we thought this might be a good idea. Next was the new Casper mattress, which we’re both totally obsessed with. And after that, came new pillows that didn’t feel like you’d only thrown a pillowcase around a bag of cotton batting. So we had the foundation down, but now it was time to address the bedding.

Now, I should preface by saying that there was nothing wrong with our old bedding. This had been replaced a few times between college and the present, but with the new setup being as awesome as it was, we just felt like it deserved something better. We started looking into our options – Egyptian cotton, Supima, special weaves, you name it. Then it occurred to me: what if my sheets could do more than just be super comfortable?

bedgear Saves My Sleep Yet Again

As you probably know by now, our townhouse doesn’t have air conditioning. While this is fine for most of the year (being so close to the ocean and all), when those hot nights do come around, it can be a little miserable. So I changed my research. After looking around to see what my options were as far as sheets that would address this problem, it was clear that there was really only one kind that would do the trick, and that was the bedgear Dri-Tec Moisture Wicking Sheet Set ($195 USD). Honestly, these seemed to stand alone as far as technology and promises were concerned, and the ratings looked fantastic. From hot sleepers to people without air conditioning (both things I’m familiar with) everyone seemed to love them. Naturally, I thought we should give them a try.

Read also: Is There Really Such A Thing As A Performance Pillow?

When the sheets arrived, it was instantly clear that they were different from anything I’d ever had before. They reminded me of a super silky, yet cool to the touch, pair of gym shorts. We couldn’t wait, so we made the bed immediately and crawled in for the night.

Let me tell you, that research and those reviews did not disappoint. Those sleek sheets were insanely comfortable. More importantly though, they delivered. With the old bed setup, I would wake up a few times a night, boiling and gross (sorry, just being honest). While the new mattress definitely made the situation much better, if the night was an incredibly warm one, I’d still wake up with the same problem at least once. Of course, I wasn’t too horribly upset about this. Considering how bad the problem had been, I was happy that it had been reduced to the degree it was. But, thanks to the combination of bedgear’s Dri-Tec fabric and panel construction, what was left of my problem is now gone. What’s even better, the features of these sheets that lend them to fixing this problem also give them motion transfer reduction. This way, if you or your partner happens to be restless in the night (though it won’t be because of a temperature issue) you won’t disturb one another at all. Imagine how happy we were. In just a few months, we went from waking up with a bruised nose, to not even so much as feeling the other roll over.

So, it’s not surprising that I have to say I’m extremely happy with my decision to add the bedgear Dri-Tec sheets to our bedding repertoire. Now all that’s left is a comforter, and if I can find one half as good as what we just got, I’ll almost literally be sleeping on a cloud.