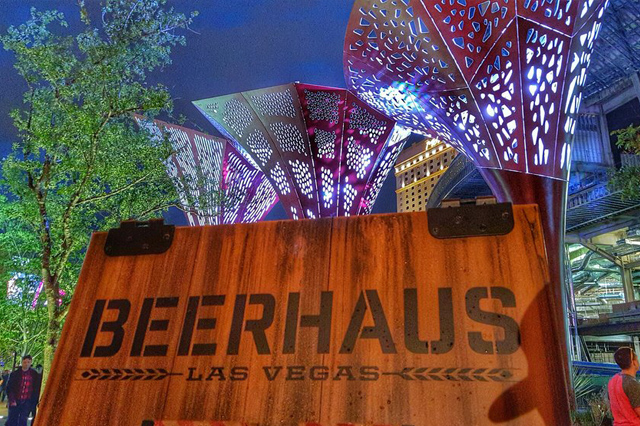 The New Oktoberfest at Beerhaus In The Park, Las Vegas

The original idea of German Oktoberfest had medieval origins, and took place in Munich, during a time when all the left-over summer beers had to be consumed before the new season’s beers were brewed. So the original Oktoberfest was probably a casual, though fun, activity for the purpose of disposing of any left-over beer. A great eco-sensitive excuse, anyway.

This event evolved, however, into a time when there were Beer Tents, horseracing, music and dance – and where people of Munich could get their brew in half-liter, tin-lidded steins, so the summer beer could be consumed with ease. Eventually, horse racing – who was watching the horses, anyway? — was dropped from the program, but beer certainly wasn’t, and the festivities were extended to several days. Today, Oktoberfest beer celebrations have become some of the biggest parties in the world, many that extend far beyond Munich. Now, the illustrious Oktoberfest come to Las Vegas, a party town in its own right, from September 30-October 2ond. Beginning at 4 p.m. each day, Oktoberfest at The Park will begin the nightly festivities with a celebrity keg tapping, followed by live music. Guests can select commemorative half- or full-liter steins for drinking renowned craft beers from around the world – including a limited-edition Oktoberfest brew. A great way to ring in the last quarter of the old year, and the beginning of thoughts about the new. Prost!