Santa Maria Valley: Wineries, Places to Eat, and Other Things to Do

Santa Maria Valley might just be my new favorite place for a relaxed weekend getaway.

While just about everyone is familiar with California’s beloved Santa Barbara and its more ideal proximity to LA than Napa for a great wine country getaway, not everyone is aware that it’s actually divided into two different growing regions: the Santa Ynez Valley and Santa Maria Valley. Each has its own uniquely charming reasons to visit, and the wife and I recently had the luxury of experiencing the latter’s first hand. I think it’s pretty safe to say that we’re in love.

Let’s start at the beginning, shall we?

As I said before, we had the opportunity to visit the Santa Maria Valley at the end of wine season last year, and the trip was pretty much amazing right out of the gate. We opted to take the PCH as far as we could, which meant about half of the trek consisted of iconic, gorgeous cliffside ocean views and the other half consisted of serenely passing through the desert, still enveloped in the sense of calm the first half had given us. We knew we’d reached our destination when the rocky hills started turning into fields of grapevines. 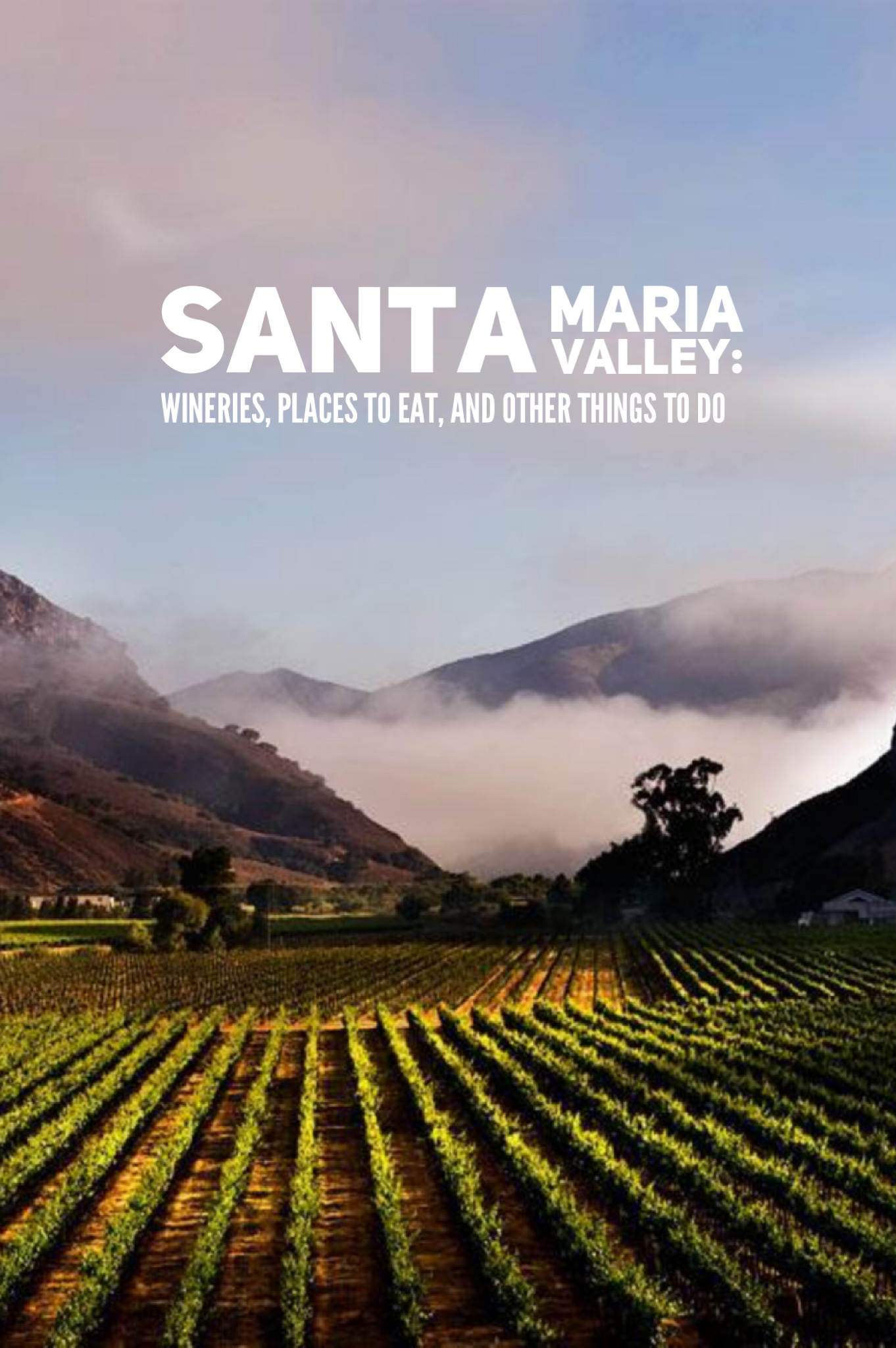 Where to Stay in the Santa Maria Valley

When it comes to where to stay in the Santa Maria Valley, you totally have your pick in terms of both type and volume. The town of Santa Maria has a plethora of lodgings available, ranging from the historic Santa Maria Inn to more commercial hotels like the Radisson, where we stayed. If you’re in the market for a bed and breakfast, there are two that can be found just north or south of the area, the Kaleidoscope Inn & Garden and Victorian Mansion Bed & Breakfast, respectively. Admittedly, the latter is technically in the Santa Ynez Valley, but the thoroughly interesting room themes and close proximity to the Santa Maria Valley definitely make it worth a mention. Finally, there’s the rental option—my personal favorite choice, as it gets you closest to the action in Orcutt, where we spent the majority of our time. 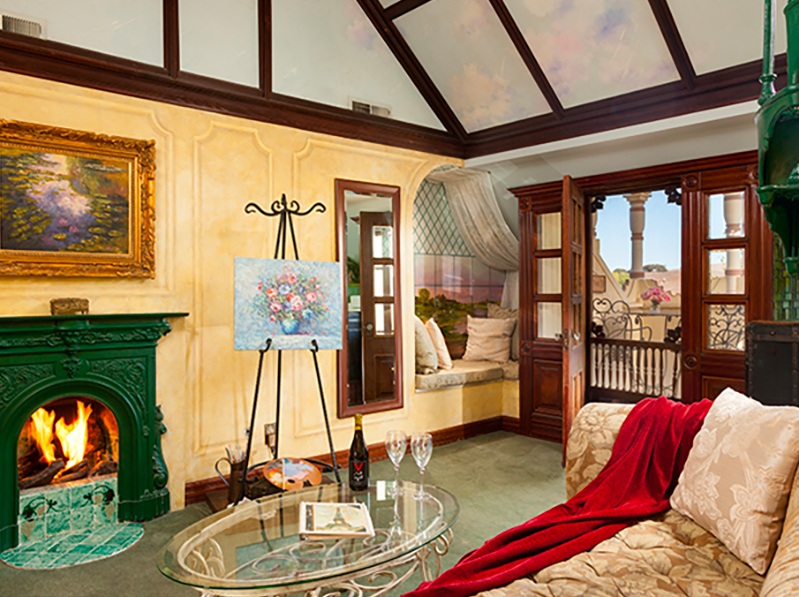 Where to Eat in the Santa Maria Valley

Dinner our first night was at the Far Western Tavern, “California ranch cuisine” with a few Italian themes peppered into the menu from the owners (I’m sure there’s a spaghetti western joke in there somewhere but mentioning the potential was about as far as I could get). We started with a couple of cocktails, a Black Manhattan for me and a Basil French 75 for Sarah. As expected, the drinks were fantastic and, yes, a pretty great indication of how good our meal was going to be.

Just like when we were choosing our beverages, we had a little trouble deciding what we wanted. Luckily, ordering a lot from the menu to share goes over a lot better than ordering a ton of cocktails so, that’s exactly what we did. 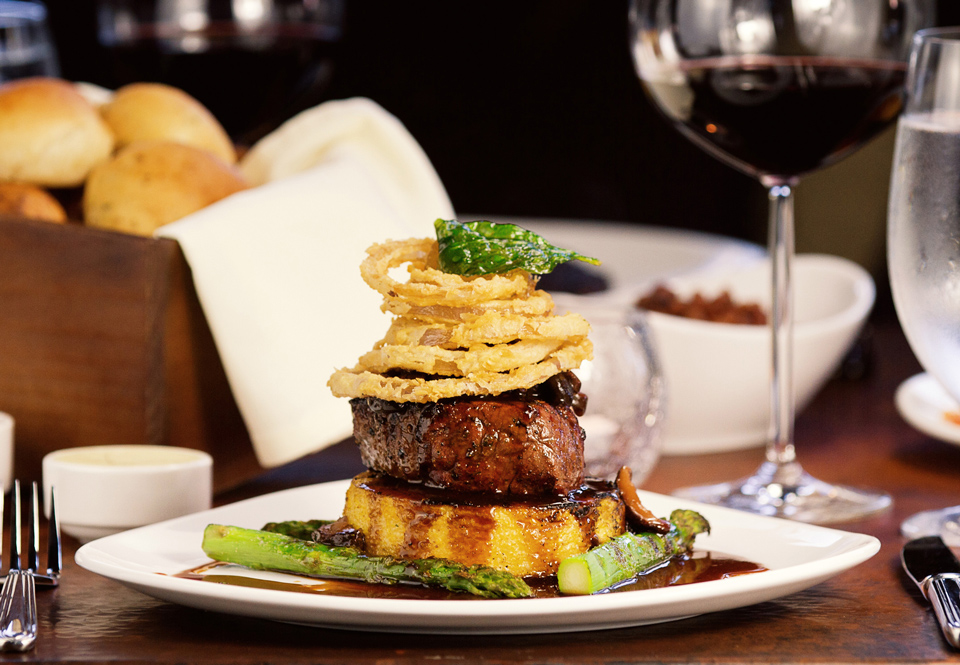 The next time we go back, this place will absolutely be at the top of our list for a splurgey night out. Everything we had was so good it was difficult to stop eating. We basically had to be rolled out of the restaurant when we were finished.

Before moving on, I have to mention how great the staff was here too. Our server, Errol Guidry (aka “The Cajun”) was as great with conversation as he was at making sure we were taken care of. If you somehow have the option of requesting a section, I would highly recommend his. We also had the privilege of talking to the manager, Maria Noblitt, for a bit about the restaurant and its owners. Between the two of them, it’s not at all surprising that we had as great a time as we did.

As I’m sure you’re not surprised to hear, we chose to forgo breakfast after the dinner we’d had the night before. We probably could have chosen to not consume any more until that evening and been perfectly fine as far as fullness, but we were going to be touring a few vineyards in the afternoon, so lunch seemed like the responsible thing to do. Let me tell you, I’m SO happy we decided to eat—specifically at Pizzeria Bello Forno–because we would have missed the best pizzas of our lives. 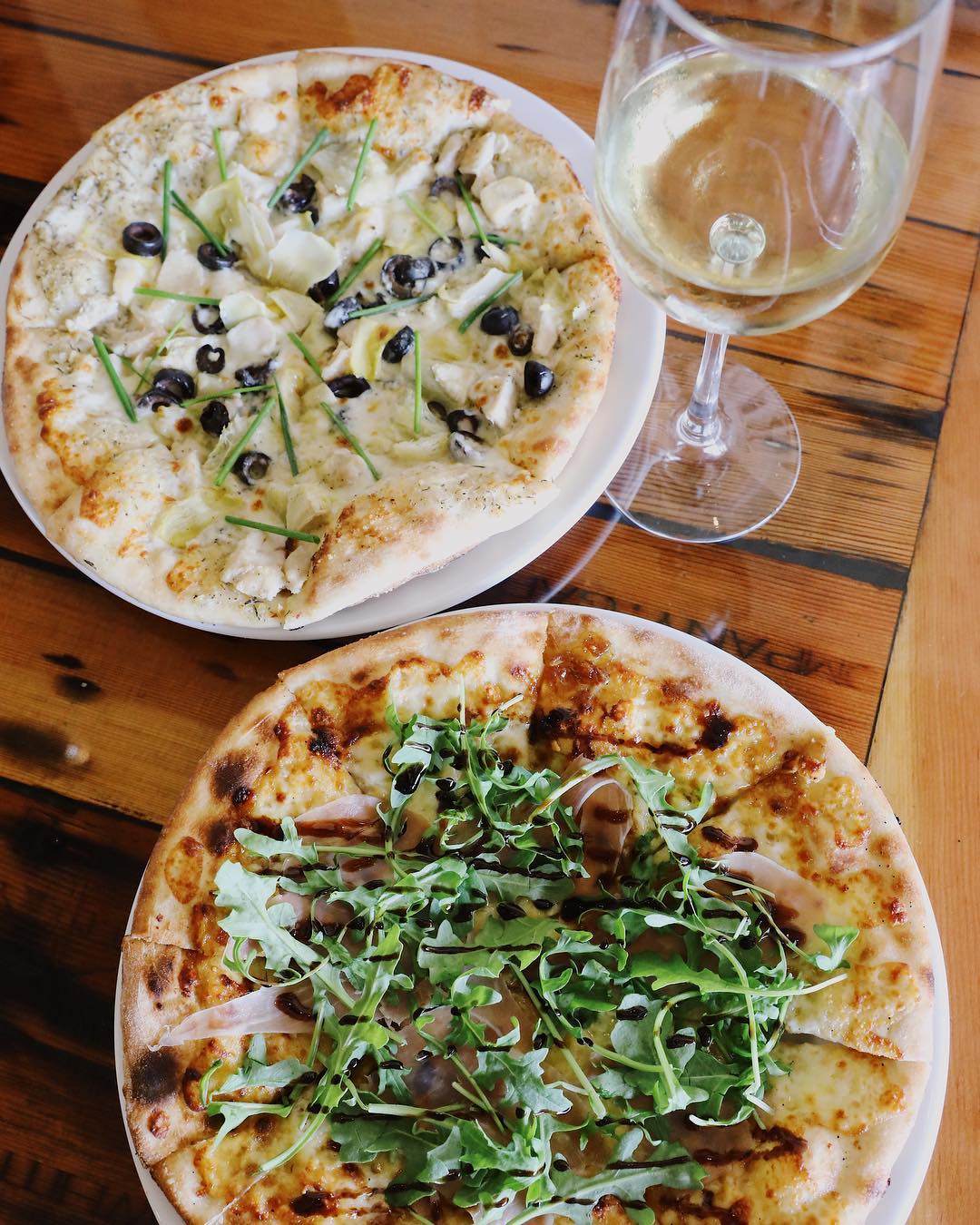 Arguably the best pizzas we’ve ever had, served with local wine from Presqu’ile. 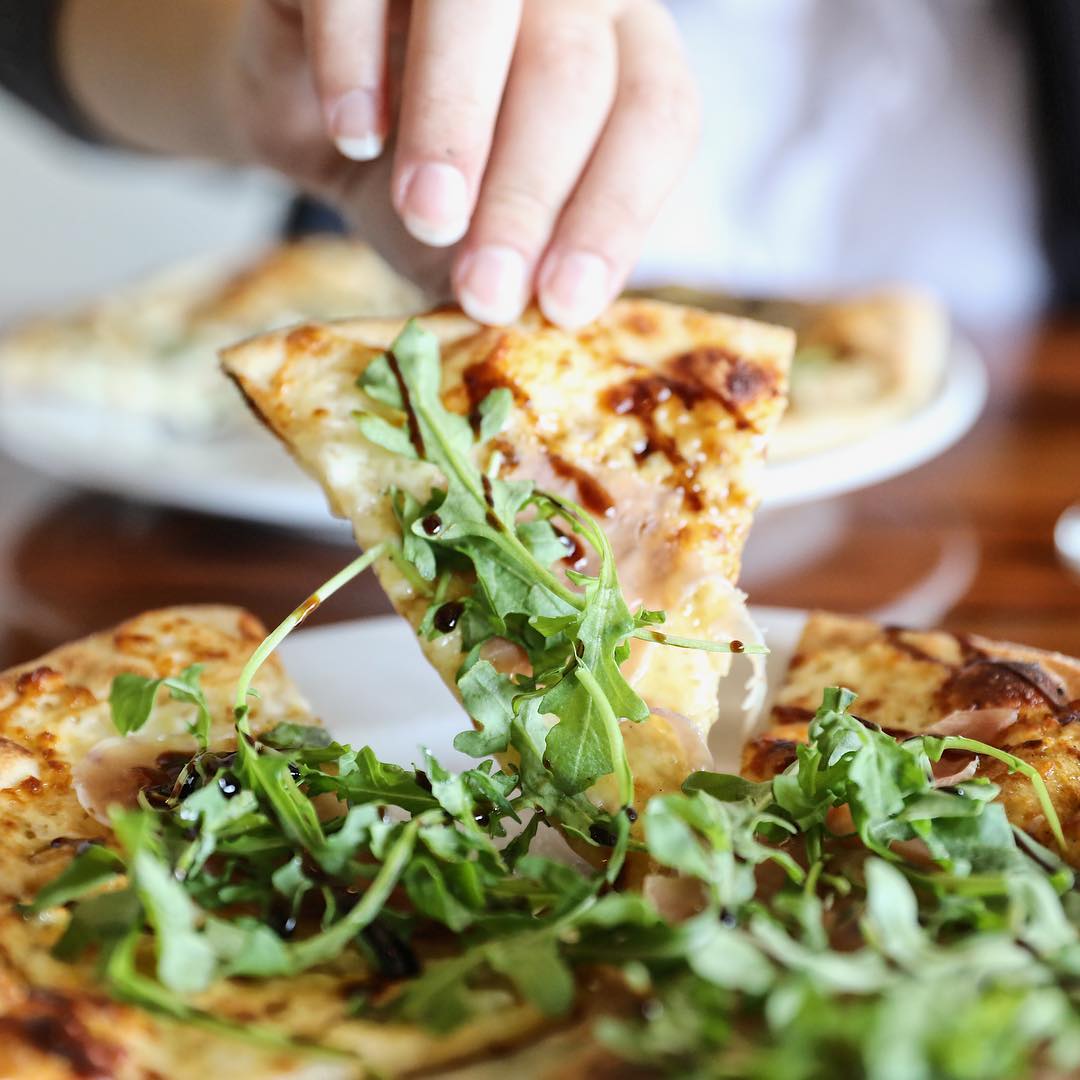 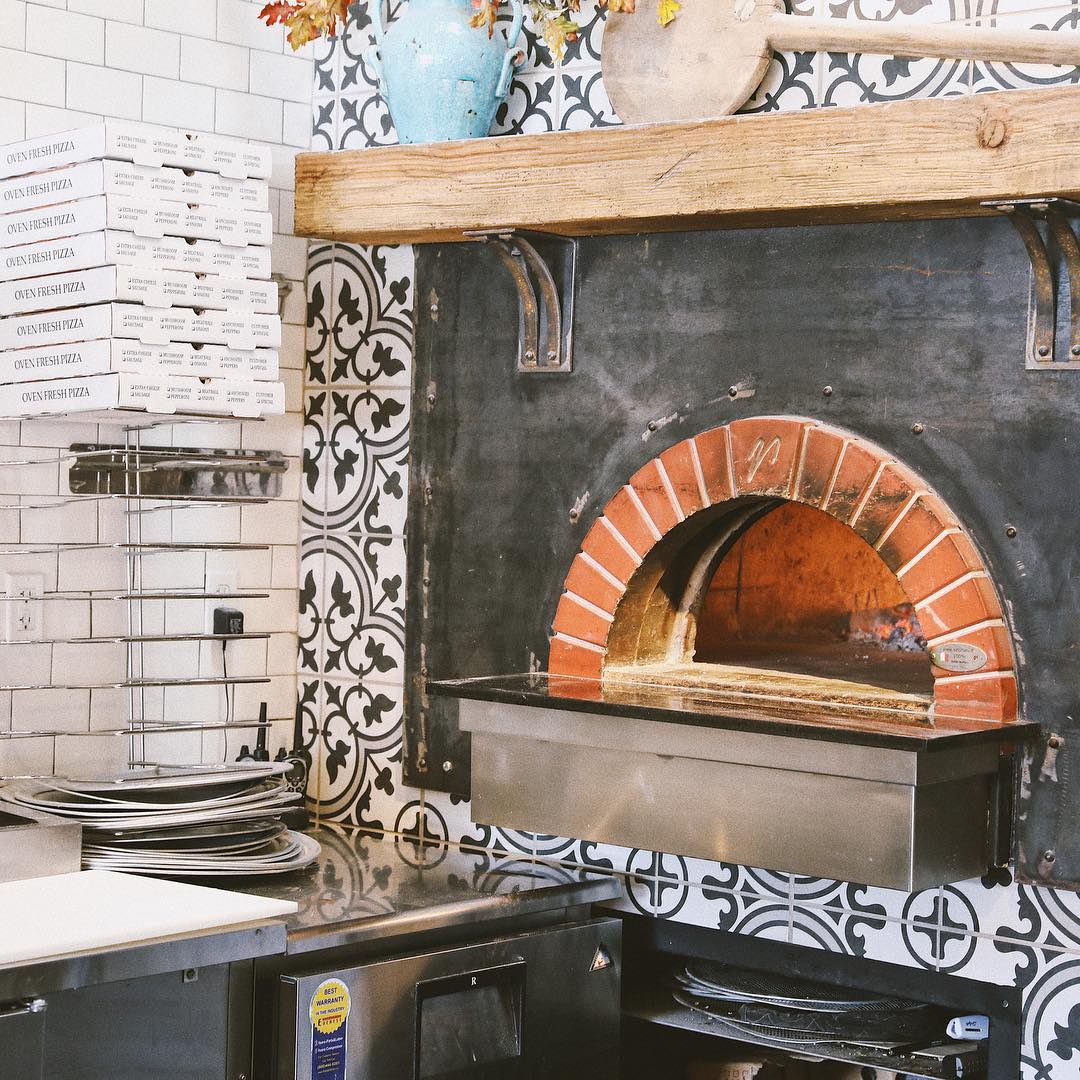 Pizzeria Bello Forno’s oven that had been shipped in from Tuscany.

Before leaving, we spoke with the manager, Stephan Spallino, and it became pretty clear why they’d already been winning awards in the little over year-and-a-half that they’d been open: everything was as fresh and authentic as you could possibly get. Perhaps unsurprisingly, these ridiculously good pizzas were all wood-fired. That extra bit worth telling here is that the oven was brought in from Tuscany, right along with most of their ingredients. What wouldn’t make sense to bring in, like the mozzarella, pesto, heirloom tomatoes, and white sauce were all made in-house, purchased at the local farmer’s market, or both. My stomach is actually growling right now thinking about the lunch we had there.

Where to Drink in the Santa Maria Valley

The Naughty Oak Brewing Company was literally the first place we went after we put our bags down and it really was the perfect introduction to the area. Thanks to the ideally temperate day, incredibly friendly staff, and literal front porch full of locals, the place had the most pleasantly comfortable and refreshing atmosphere I’ve experienced in a long time. Since Sarah and I knew this would probably be the only time we would be able to hit this specific place, we decided to share a flight of twelve of their beers, letting the bartender drive as far as the selections went. I have to say, I think the range of different kinds and flavors was the most expansive I’ve ever tried. I don’t know that either of us was really able to nail down a favorite, but I do find myself still thinking of their coffee blend even now. 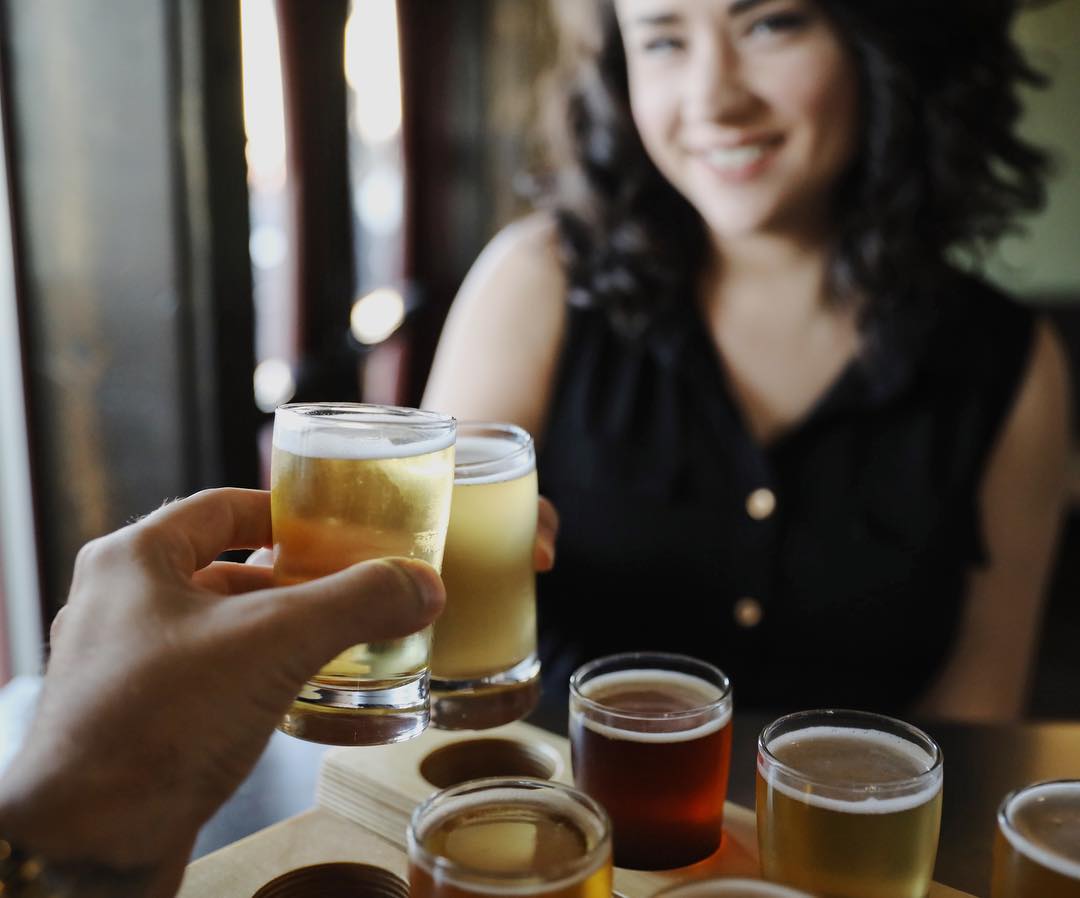 While everything about the weekend we spent in Santa Barbara wine country was fantastic, if I had to choose a favorite thing, it would hands down be the wine trolley. As the name has probably led you to believe, the car takes you around the different Santa Maria Valley wineries, running between the middle of May through the middle of October. At only $10 a ticket when purchased ahead of time, you’d be hard-pressed to find a more fun, frugal, and/or responsible way to take a winery tour.

We got picked up in Old Orcutt, near the CORE Winery tasting room, though you can hop on at any stop on the route. From there, stops include the Presqu’ile Winery, Cottonwood Canyon Winery, and Costa de Oro Winery before beginning the 60-minute cycle again back in Old Orcutt. You can step on/off whenever you’d like to try all of the choice Chardonnay, Pinot Noir, and Syrah the area is known for—so long as it’s within the 10:30 am-5/6:30 pm window. 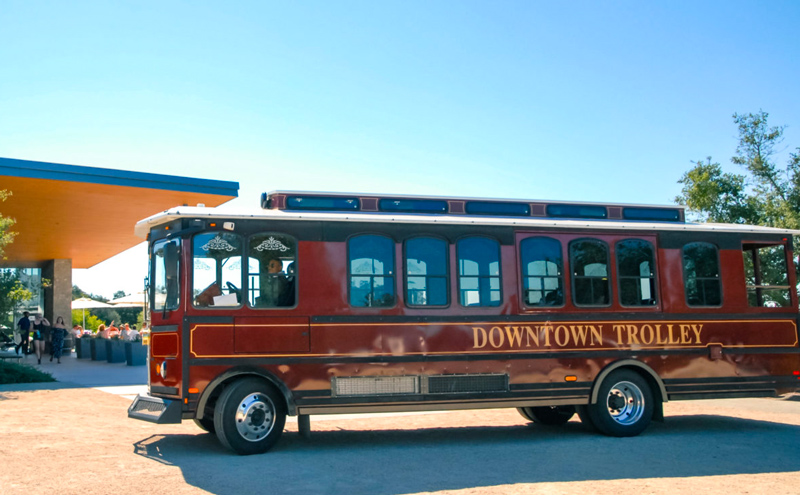 Everywhere we visited was undoubtedly worth stopping by (Cottonwood Canyon was even kind enough to open up for us while they were setting up for an evening concert), but our true favorite stood out in the family-run Presqu’ile Winery. As soon as we stepped off the trolley, we were met with extraordinary views and a relaxing atmosphere. After looking around the grounds a little bit, we went inside for a proper tour and a tasting flight or two. They have a few different options for tours at Presqu’ile, ranging from those that include food to one built for the perfect marriage proposal. We went on the most basic, and it was a completely engaging and unique experience.

Getting a private tour of @presquilewine with Matt was a highlight of our day in #SantaMariaValley. He’s a wealth of knowledge for both the brand and the area. Great wine and great people! – #SantaMariaStyle #Winery #WineTour #WineCellar #BarrelRoom #PressKEEL #PresquileWine

As for what wines to try there, that’s going to be entirely up to you. Their repertoire is the same as the region is known for, with the additions of Sauvignon Blanc, Rosé of Pinot Noir, sparkling wines, and Nebbiolo. I think what stood out to me the most about the flights we tried was, while some had many of the characteristics we’ve come to know those specific varieties for, they also had variations distinct from anything I’ve tasted before, including a Pinot Noir that made me understand the true meaning of “minerality” for the first time. Anyway, if you only get the option to hit one Santa Maria Valley Winery during your stay, I would absolutely make it this one.

What to Do in the Santa Maria Valley

While our short weekend was very much a food-and-drink-centric one, there are tons of other things to do in the area. There’s the estuary and Monarch migration for nature-lovers, the Santa Maria Philharmonic Society and Valley Art Gallery for lovers of the arts, antique shops for those looking to score something interesting to take back home, and tons of opportunities like the Pismo Dunes for outdoor enthusiasts. Whatever you like to do, you’re almost definitely going to build the perfect weekend—or week—with a visit to the Santa Maria Valley.